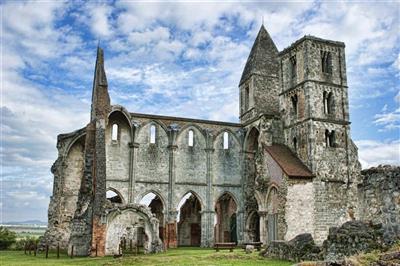 
Combining features of ancient Roman and Byzantine buildings and other local traditions, Romanesque architecture is known by its massive quality, thick walls, round arches, sturdy pillars, barrel vaults, large towers and decorative arcading. Each building has clearly defined forms, frequently of very regular, symmetrical plan; the overall appearance is one of simplicity when compared with the Gothic buildings that were to follow. The style can be identified right across Europe, despite regional characteristics and different materials.


Many castles were built during this period, but they are greatly outnumbered by churches. The most significant are the great abbey churches, many of which are still standing, more or less complete and frequently in use. The enormous quantity of churches built in the Romanesque period was succeeded by the still busier period of Gothic architecture, which partly or entirely rebuilt most Romanesque churches in prosperous areas like England and Portugal. The largest groups of Romanesque survivors are in areas that were less prosperous in subsequent periods, including parts of southern France, rural Spain and rural Italy. Survivals of unfortified Romanesque secular houses and palaces, and the domestic quarters of monasteries are far rarer, but these used and adapted the features found in church buildings, on a domestic scale.


According to the Oxford English Dictionary, the word "Romanesque" means "descended from Roman" and was first used in English to designate what are now called Romance languages (first cited 1715). The French term "romane" was first used in the architectural sense by archaeologist Charles de Gerville in a letter of 18 December 1818 to Auguste Le Prévost to describe what Gerville sees as a debased Roman architecture. In 1824 Gerville's friend Arcisse de Caumont adopted the label "roman" to describe the "degraded" European architecture from the 5th to the 13th centuries, in his Essai sur l'architecture religieuse du moyen-âge, particulièrement en Normandie, at a time when the actual dates of many of the buildings so described had not been ascertained:


The first use in a published work is in William Gunn's An Inquiry into the Origin and Influence of Gothic Architecture (London 1819). The word was used by Gunn to describe the style that was identifiably Medieval and prefigured the Gothic, yet maintained the rounded Roman arch and thus appeared to be a continuation of the Roman tradition of building.


The term is now used for the more restricted period from the late 10th to 12th centuries. The term "Pre-romanesque" is sometimes applied to architecture in Germany of the Carolingian and Ottonian periods and Visigothic, Mozarab and Asturian constructions between the 8th and the 10th centuries in the Iberian Peninsula while "First Romanesque" is applied to buildings in north of Italy and Spain and parts of France that have Romanesque features but pre-date the influence of the Abbey of Cluny.