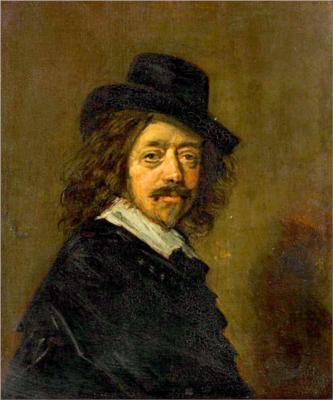 Frans Hals is one of the most celebrated and prominent painters of the Dutch Golden Age, probably only second to Rembrandt or Vermeer. Although Hals enjoyed success during his lifetime, he was largely forgotten by the generations that followed. Only in the 19th century, his art was appreciated again, mainly due to the work of French journalist and art critic, Theophile Thoré-Bürger. One of the essential characteristics of Hals's art is a sketchy aesthetic exhibited in loose and unblended brushstrokes. Bürger recognized the virtuosity of Hals's expressive style and praised the spontaneity, vitality, and freedom of his art. In his writings, Bürger did not only renew the interest in Hals's work, but he also connected Hals's art to the artwork produced by the contemporaries of the time. In this way, Hals became particularly appealing to the modern sensibilities of 19th-century artists, such as Claude Monet, Gustave Courbet, Edouard Manet, James Abbott McNeill Whistler, and Vincent van Gogh.

Hals was born in 1582 or 1583 in Antwerp. Soon after, his family fled to the north to escape Spanish domination. They settled in Haarlem, where Hals will reside for the rest of his life. In 1610, Hals joined the Haarlem Guild of Saint Luke, and around the same time, he married his first wife, Anneke Harmensdochter. However, Anneke died in 1615, and two years later, Hals married his second wife, Lysbeth Reyniers. In 1616 Hals received his first significant commission and created the first group portrait of his career, Banquet of the St. George Civic Guard (1616). Here, Hals successfully captures the individual characteristics of the twelve sitters in the lively, joyful atmosphere of the banquet. In the same year, the artist also traveled to Antwerp, where he spent approximately four months. The trip was significant because it acquainted Hals with works of Flemish artists like Peter Paul Rubens, Jacob Jordaens, and Anthony van Dyck.

In earlier stages, Hals worked simultaneously in two stylistic modes. For commissioned portraits, his style was smooth and refined, while generic subjects he painted in a more loose and expressive style. The last one we can distinguish while comparing commissioned portraits, such as The Laughing Cavalier (1624) and Portrait of Jacob Pietersz Olycan (1625) to genre portraits from the same period, such as Portrait of a Jester with Lute (ca.1623-1624) and Boy with a Lute (ca. 1625). In the 1630s, Hals turned his attention solely to commissioned portraiture, and at the same time, he gradually transitioned to his rougher style of painting. In later works, like Portrait of Willem Coymans (1645) and Portrait of Jasper Schade van Westrum (1645), the traces of the artist's brush become more evident. Massive dabs of white mold collars and sleeve ruffles, and opulent embroideries that were executed meticulously in the 1620s, are marked now by short sketchy strokes. Hals continuously painted into old age. The group paintings which form a pendant, Regents of the Old Men's Alms House, Haarlem (1664), and The Regentesses of the Old Men's Almshouse, Haarlem (1664) were painted only two years before his death. Frans Hals died in 1666 and was buried at St. Bavo's Church in Haarlem.

Frans Hals the Elder (/hɑːls/; Dutch: [ɦɑls]; c. 1582 – 26 August 1666) was a Dutch Golden Age painter, normally of portraits, who lived and worked in Haarlem. He is notable for his loose painterly brushwork, and he helped introduce this lively style of painting into Dutch art. Hals played an important role in the evolution of 17th-century group portraiture.

Hals was born in 1582 or 1583 in Antwerp, then in the Spanish Netherlands, as the son of cloth merchant Franchois Fransz Hals van Mechelen (c. 1542–1610) and his second wife Adriaentje van Geertenryck. Like many, Hals' parents fled during the Fall of Antwerp (1584–1585) from the south to Haarlem in the new Dutch Republic in the north, where he lived for the remainder of his life. Hals studied under Flemish émigré Karel van Mander, whose Mannerist influence, however, is barely noticeable in Hals' work.

In 1610, Hals became a member of the Haarlem Guild of Saint Luke, and he started to earn money as an art restorer for the city council. He worked on their large art collection that Karel van Mander had described in his Schilderboeck ("Painter's Book") published in Haarlem in 1604. The most notable of these were the works of Geertgen tot Sint Jans, Jan van Scorel, and Jan Mostaert that hung in the St John's Church in Haarlem. The restoration work was paid for by the city of Haarlem, since all Catholic religious art had been confiscated after the satisfactie van Haarlem had been reversed in 1578, which had formerly given Catholics equal rights to Protestants. However, the entire collection of paintings was not formally possessed by the city council until 1625, after the city fathers had decided which paintings were suitable for the city hall. The remaining art that was considered too "Roman Catholic" was sold to Cornelis Claesz van Wieringen, a fellow guild member, on the condition that he remove it from the city. It was in this cultural context that Hals began his career in portraiture, since the market had disappeared for religious themes.

The earliest known example of Hals' art is the portrait of Jacobus Zaffius (1611). His 'breakthrough' came with the life-sized group portrait The Banquet of the Officers of the St George Militia Company in 1616. His most noted portrait today is the one of René Descartes which he made in 1649.

Frans Hals married his first wife Anneke Harmensdochter around 1610. Frans was of Catholic birth, however, so their marriage was recorded in the city hall and not in church. Unfortunately, the exact date is unknown because the older marriage records of the Haarlem city hall before 1688 have not been preserved. Anneke was born 2 January 1590 as the daughter of bleacher Harmen Dircksz and Pietertje Claesdr Ghijblant, and her maternal grandfather, linen producer Claes Ghijblant of Spaarne 42, bequeathed the couple the grave in St Bavo's Church (Grote Kerk) where both are buried, though Frans took over 40 years to join his first wife there. Anneke died in 1615, shortly after the birth of their third child and, of the three, Harmen survived infancy and one had died before Hals' second marriage. As biographer Seymour Slive has pointed out, older stories of Hals abusing his first wife were confused with another Haarlem resident of the same name. Indeed, at the time of these charges, the artist had no wife to mistreat, as Anneke had died in May 1615. Similarly, historical accounts of Hals' propensity for drink have been largely based on embellished anecdotes of his early biographers, namely Arnold Houbraken, with no direct evidence existing documenting such. After his first wife died, Hals took on the young daughter of a fishmonger to look after his children and, in 1617, he married Lysbeth Reyniers. They married in Spaarndam, a small village outside the banns of Haarlem, because she was already 8 months pregnant. Hals was a devoted father, and they went on to have eight children.