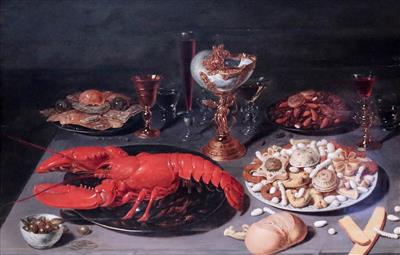 Osias Beert or Osias Beert the Elder (c. 1580 – 1623/24) was a Flemish painter active in Antwerp who played an important role in the early development of flower and "breakfast"-type still lifes as independent genres in Northern European art. He has been recognized as one of the most influential artists of the earliest generation of still life painters in Flanders.

Little is known about this artist's early life. It is believed that he was born in Antwerp around 1580 and studied under the little-known Andries van Baesrode (or 'van Baseroo'). He joined the city's Guild of St. Luke in 1602 and married Marguerite Ykens on 8 January 1606.

Beert was not only a painter but also traded as a cork merchant. Beert was also a member of one of the local Chambers of rhetoric, which suggests he was involved in intellectual pursuits other than painting. He is believed to have died in Antwerp at the end of 1623 or 1624.

His pupils included Frans van der Borch, Frans Ykens (who was his nephew), Paulus Pontius and Jan Willemsen. Beert’s son, Osias Beert the Younger (1622–78), was also a painter but is unlikely to have studied under his father since his father is believed to have died when the son was very young.

Osias Beert is mainly known as a painter of flowers and banquet (breakfast) pieces, genres in which he played a pioneering role. He rarely signed or monogrammed and never dated his work. Of his works created on copper three bear the mark of the panel maker Pieter Stas and the dates 1607, 1608 and 1609. Even while a lack of dated works has made it difficult to date his work, stylistic analysis allows a tentative chronology. The works with a high viewpoint and little overlapping of objects are regarded as earlier than those with a lower viewpoint and a compacter arrangement of objects. These later works also have a better spatial coherence.

Only four signed works by him are known and from these it has been possible to attribute four works in the Museum of Grenoble to him. Since knowledge about this early stage of the Flemish still life is still fragmentary there has been a tendency to attribute too many works to Beert. Some works attributed to him are likely by his pupils, while some attributed to Osias Beert the younger were probably painted by his father.

Osias Beert often painted on oak panels, using a glazing technique. By using multiple superimposed layers of very fluid oil he was able to obtain a transparency and a wide variety of colours. Some of his works are on copper.

He was one of the first artists to specialize in still life painting when the production of works in this genre was still minor and typically anonymous. His breakfast pieces, usually referred to by their Dutch name ontbijtjes ("little breakfasts"), represent the scene from a high viewpoint with a forced perspective.

This technique is commonly seen in early Flemish and Dutch still life painting. His compositions often show dense groupings in a balanced arrangement. His style is quasi-geometric and shows an eye for detail.