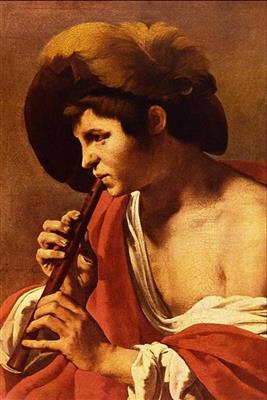 Hendrick Jansz ter Brugghen (or Terbrugghen) (1588 – 1 November 1629) was a painter at the start of Dutch Golden Age painting and a leading member of the Dutch followers of Caravaggio–the so-called Utrecht Caravaggisti. Along with Gerrit van Hondhorst and Dirck van Baburen, Ter Brugghen was one of the most important Dutch painters to have been influenced by Caravaggio.

No references to Ter Brugghen written during his life have been identified. His father Jan Egbertsz ter Brugghen, originally from Overijssel, had moved to Utrecht, where he was appointed secretary to the Court of Utrecht by the Prince of Orange, William the Silent. He had been married to Sophia Dircx. In 1588 he became bailiff to the Provincial Council of Holland in The Hague, where Hendrick was born.

The earliest brief reference to the painter is in Het Gulden Cabinet (1661) of Cornelis de Bie, where he is mistakenly referred to as Verbrugghen. Another short account is found in the Teutsche Academie (1675) by Joachim von Sandrart, where he is referred to as Verbrug. Here we learn that he studied with Abraham Bloemaert, a Mannerist painter. Sandrart also refers to the painter's "tiefsinnige, jedoch, schwermütige Gedanken in seinen Werken" [profound, but melancholic thoughts in his works].

From this unsure footing, the artist's son Richard ter Brugghen sought to rehabilitate his father's reputation as a painter in the early 18th century. He secured a letter, dated 15 April 1707, from Adriaen van der Werff in Rotterdam, attesting to his appreciation of Hendrick's work. Later that year, on 5 August 1707, Richard presented the government council of Deventer with four paintings of the Evangelists, to be hung in the Town Hall as a permanent memorial to his father.

An engraving, in all likelihood commissioned by Richard ter Brugghen from Pieter Bodart, and based on an earlier drawing by Gerard Hoet, was put about in 1708. It shows an idealised portrait of Hendrick, the family coat-of-arms, and a printed caption translated from the Dutch as:

Cornelis de Bie, in his Spiegel vande Verdrayde Werelt (1708), and Arnold Houbraken, in his De Groote Schouburgh (1718-1721), produced biographies where they repeated Richard's claims that the painter met Rubens in Rome and also worked in Naples. There was a cadet of the same name serving in the army of Ernst Casimir of Nassau-Dietz in the spring of 1607, and for this reason, Ter Brugghen is thought to have been in Italy, but only in that year, rather than as previously believed in 1604 (inferred as it was from the inscription on the Bodart print). This would certainly mean that he never met Caravaggio in Rome; that artist had fled Rome on a murder charge in 1606. However, it is certain that he was the only Dutch painter in Rome during Caravaggio's lifetime.

By 1614, Ter Brugghen was in Milan, on his way home. On 1 April 1615, Thyman van Galen and Ter Brugghen are witnesses before the court in Utrecht. He is already listed as a member of the Utrecht painter's guild in 1616, and on 15 October of that year he married Jacomijna Verbeeck, his elder brother Jan's stepdaughter.