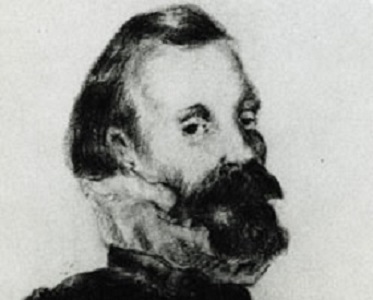 Hendrick Avercamp (January 27, 1585 (bapt.) – May 15, 1634 (buried)) was a Dutch painter. Avercamp was born in Amsterdam, where he studied with the Danish-born portrait painter Pieter Isaacks (1569–1625), and perhaps also with David Vinckboons. In 1608 he moved from Amsterdam to Kampen in the province of Overijssel. Avercamp was deaf and mute and was known as "de Stomme van Kampen" (the mute of Kampen).

Avercamp's work enjoyed great popularity and he sold his drawings, many of which were tinted with water-color, as finished pictures to be pasted into the albums of collectors. The Royal Collection has an outstanding collection of his works.

Avercamp died in Kampen and was interred there in the Sint Nicolaaskerk.

Avercamp probably painted in his studio on the basis of sketches he had made in the winter. Avercamp is famous even abroad for his winter landscapes. The passion for painting skating characters probably came from his childhood: he was practicing this hobby with his parents. The last quarter of the 16th century, during which Avercamp was born, was one of the coldest periods of the Little Ice Age.

The Flemish painting tradition is mainly expressed in Avercamp's early work. This is consistent with the landscapes of Pieter Bruegel the Elder. Avercamp painted landscapes with a high horizon and many figures who are working on something. The paintings are narrative, with many anecdotes. For instance, naughty details are included in the painting "Winter landscape with skaters": a couple making love, buttocks and a peeing male.

Later in his life drawing the atmosphere was also important in his work. The horizon also gradually dropped down under more and more air.

Avercamp used the painting technique of aerial perspective. The depth is suggested by change of color in the distance. To the front objects are painted, such as trees or a boat. This technique strengthens the impression of depth in the painting.

Sometimes Avercamp used paper frames, which were a cheap alternative to oil paintings. He first drew with pen and ink. This work was then covered with finishing paint. The contours of the drawing remained. Even with this technique Avercamp could show the pale wintry colors and nuances of the ice .

Avercamp produced about a hundred paintings. The bulk of his artwork can be seen in the Rijksmuseum in Amsterdam, the Mauritshuis in The Hague and abroad. From November 20, 2009 to February 15, 2010 the Rijksmuseum presented an exhibition of his work entitled "Little Ice Age".