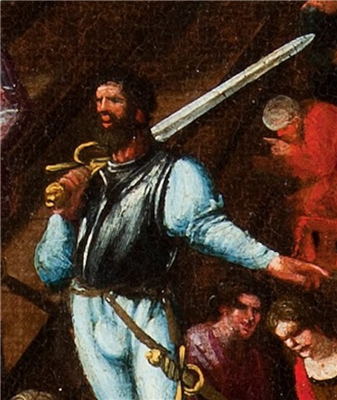 Agostino Tassi (Perugia, 1578– Rome, 1644) was an Italian painter of landscapes and seascapes, who is now best known as the rapist of Artemisia Gentileschi.

Because he aspired to nobility he modified the details of his early life. Though he was born in Perugia he claimed to have been born in Rome. His family name was Buonamici, but Agostino adopted the surname Tassi to give substance to his story that he was adopted by the Marchese Tassi. He was actually the son of a furrier named Domenico.

Tassi may have worked for a time in Livorno, as well as in Florence. Among his followers or pupils in Livorno is thought to be Pietro Ciafferi. During his sojourn in Florence it is believed that was he was made a galley slave in the Grand Duke's convict galleys for some unspecified crime. However, he was allowed to move about freely on the ship instead of pulling on an oar. More importantly, he was able to paint and draw on the galley, and was thus provided with ample material from which to execute his seascapes and images of ports, ships, and fishing scenes.

Regarding his artistic formation, Tassi is said to have been a pupil of Paul Bril, from whom he derived some of his images of the sea. He later worked in Rome with Orazio Gentileschi, who painted figures, after being commissioned by Pope Paul V.

Considered a master of perspective and a good painter of illusionistic architectural decoration, Tassi painted in several Roman palaces including the Quirinale (1611‑12), the Rospigliosi and the Doria Pamphili (1637).

In Rome, Tassi also served as the master (from April 1625) of French painter Claude Lorrain. Tassi hired Lorrain to grind his colors and to do all of the household work.

Though better known as a painter of frescoes, Tassi also painted some canvases, which include Arrival of the Queen of Sheba before Solomon (c. 1610) and Entry of Taddeo Barberini from the Porta del Popolo (1632). His depictions of night scenes had a certain influence on the Dutch Leonaert Bramer.

In 1612, Tassi was convicted of raping Artemisia Gentileschi, Orazio Gentileschi's daughter and a talented painter. Tassi originally denied the accusation, stating, "Never have I had carnal relations nor tried to have it with the said Artemisia... I've never been alone in Artemisia's house with her." He afterwards claimed that he had visited her house in order to safeguard her honor. Tassi had already run afoul of the law, and had earlier been accused of raping both his sister-in-law and one of his wives. His wife had been missing for a time, and it was believed that Tassi had hired bandits to kill her.

In the ensuing 7-month rape trial, it was discovered that Tassi had planned to murder his wife, had committed incest with his sister-in-law and planned to steal some of Orazio’s paintings. At the end of the trial Tassi was imprisoned for two years. His verdict was later annulled and he was at liberty in 1613. The trial has subsequently influenced the feminist view of Artemisia Gentileschi during the late 20th century.