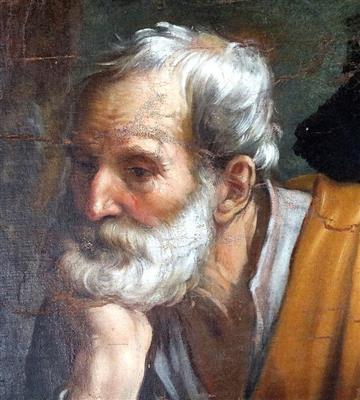 Rest in the flight to Egypt (detail), c.1625 - Domenico Fiasella

Domenico Fiasella (12 August 1589 – 19 October 1669) was an Italian painter of the Baroque period, mainly active in Genoa. He was nicknamed Il Sarzana, after his birthplace.

He was born in c, the son of Giovanni Fiasella, a silversmith, who, noting his skills apprenticed him as a boy of 11 years to work with Aurelio Lomi in Genoa, and from there he moved to work with Giovanni Battista Paggi.

Around 1607 he left for Rome, where he frequented the Accademia del Nudo. His ability was first recognized by Guido Reni and Ciriaco Mattei, which led Domenico Passignano and Cavalier D'Arpino to employ him. The Marchese Vincenzo Giustiniani commissioned paintings from him, including Christ Healing the Blind and Christ Raising the Son of the Widow of Nain (both of which were ultimately purchased by John Ringling and bequeathed to the John and Mable Ringling Museum of Art upon his death).

Fiasella's painting of Flight into Egypt had been a gift to Paul V. His Assumption of the Virgin altarpiece for Santa Maria Assunta church in Roccasecca dei Volsci, was commissioned by Valerio Massimi for 70 scudi. An Annunciation in the same church was sold for 40 scudi. He returned to Genoa by 1616, where he set up a prolific studio. He frescoed the Story of Esther for the Palazzo Lamellini alla Zecca in Genoa. Gregorio De Ferrari was one of his pupils during 1664–68. Other pupils include Angelica Veronica Airola, Valerio Castelli, Francesco Capurro, Francesco Gentileschi, Francesco Merano, Giovanni Paolo Oderico, Luca Saltarello, Giovanni Stefano Verdura, Lazzaro Villanova, Giovanni Andrea Podestà and Giovanni Vincenzo Zerbi. He collaborated occasionally with the Flemish born painter Giacomo Legi who lived and worked in Genoa. He died in Genoa.