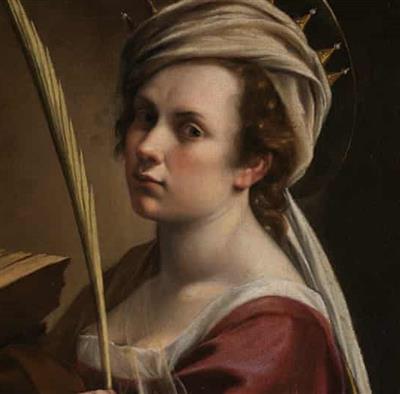 Self-portrait as the Allegory of Painting

Artemisia Gentileschi (Italian pronunciation: [arteˈmizja dʒentiˈleski]; July 8, 1593 – c. 1656) was an Italian Baroque painter, today considered one of the most accomplished painters in the generation following that of Caravaggio. In an era when female painters were not easily accepted by the artistic community or patrons, she was the first woman to become a member of the Accademia di Arte del Disegno in Florence and had international clientele.

She specialized in painting pictures of strong and suffering women from myths, allegories, and the Bible- victims, suicides, warriors. Some of her best known themes are Susanna and the Elders (particularly the 1610 in Pommersfelden) and Judith Slaying Holofernes (most famous is her 1614-20 in Galleria degli Uffizi) and Judith and Her Maidservant (her version of 1625 at the Detroit Institute of Arts) that scholars currently know of.

She was known for being able to convincingly depict the female figure, anywhere between nude and fully clothed. Artemisia was also famous for her skill and talent in handling color, both overall in the composition but also in building depth.

That she was a woman painting in the seventeenth century and that she was raped as a young woman by Agostino Tassi and participated in the prosecution of her rapist long overshadowed her achievements as an artist. For many years she was regarded as a curiosity. Today she is regarded as one of the most progressive and expressive painters of her generation.

Artemisia Gentileschi was born Artemisia Gentileschi-Lomi in Rome on 8 July 1593, although her birth certificate from the Archivio di Stato indicated she was born in 1590, the eldest child of the Tuscan painter Orazio Gentileschi and Prudentia Montone. Artemisia was introduced to painting in her father's workshop, showing much more talent than her brothers, who worked alongside her. She learned drawing, how to mix color, and how to paint. "By 1612, when she was not yet nineteen years old, her father could boast of her extraordinary talents, claiming that in the profession of painting, which she had practiced for three years, she had no peer"

Since her father's style took inspiration from Caravaggio during that period, her style was just as heavily influenced in turn. Her approach to subject matter was different from her father's, however, as her paintings are highly naturalistic, where Orazio's are idealized. At the same time, Artemisia had to resist the "traditional attitude and psychological submission to this brainwashing and jealousy of her obvious talent". By doing so, she gained great respect and recognition for her work.

The first surviving work of the seventeen-year-old Artemisia was the Susanna and the Elders (1610, Schönborn collection in Pommersfelden). At the time some, influenced by the prevailing misconceptions, suspected that she was helped by her father. The painting shows how Artemisia assimilated the realism of Caravaggio without being indifferent to the language of Annibale Carracci and the Bologna school. It is one of the few paintings on the theme of Susanna showing the sexual accosting by the two Elders as a traumatic event.