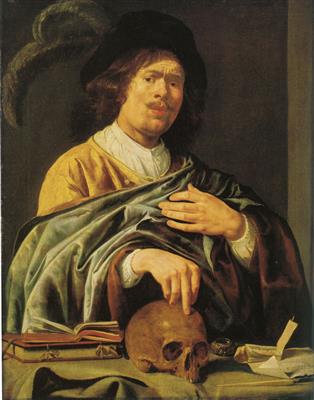 Jan Miense Molenaer (1610 – buried 19 September 1668), was a Dutch Golden Age genre painter whose style was a precursor to Jan Steen's work during Dutch Golden Age painting. He shared a studio with his wife, Judith Leyster, also a genre painter, as well as a portraitist and painter of still-life. Both Molenaer and Leyster may have been pupils of Frans Hals.

Molenaer was born and died in Haarlem. He achieved a style close to Hals' early on in his career, but later developed a style like that of Dutch genre painter, Adriaen van Ostade. His genre works often depicted players of music, such as his The Music Makers (Museum of Fine Arts, Budapest), The Duet (Seattle Art Museum), or Family Making Music (Frans Hals Museum). He also depicted Taverns and the activities of card games or games of the times such as La main chaude, or in Dutch, Handjeklap (nl), which literally means clapping hands. Molenaer also cleverly depicted biblical stories in his own time and surroundings, such as representing a scene from Peter's Gospel set in a Dutch Tavern in The Denying of Peter (Museum of Fine Arts, Budapest).