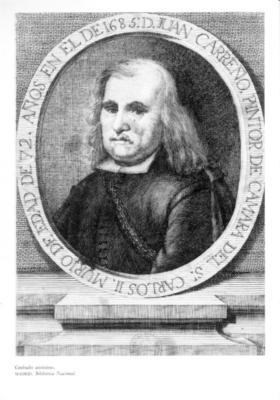 Born in Avilés in Asturias, son of a painter with the same name, Juan Carreño de Miranda. His family moved to Madrid in 1623, and he trained in Madrid during the late 1620s as an apprentice to Pedro de las Cuevas and Bartolomé Román. He came to the notice of Velázquez for his work in the cloister of Doña María de Aragón and in the Church of Our Lady of the Rosary (Iglesia de la Virgen del Rosario), Marlofa (es; an), La Joyosa. In 1658 Carreño was hired as an assistant on a royal commission to paint frescoes in the Alcázar of Madrid; later destroyed in a fire in 1734. In 1671, upon the death of Sebastián de Herrera, he was appointed court painter to the queen (pintor de cámara) and began to paint primarily portraits. He refused to be knighted in the order of Santiago, saying Painting needs no honors, it can give them to the whole world. He is mainly recalled as a painter of portraits. His main pupils were Mateo Cerezo, Cabezalero, Donoso (es), Ledesma and Sotomayor (see An account of the lives and works of the most eminent Spanish painters, sculptors and architects). He died in Madrid.

Noble by descent, he had an understanding of the workings and psychology of the royal court as no painter before him, making his portraits of the Spanish royal family in an unprecedented documentary fashion. Most of his work are portraits of the royal family and court, though there are some altarpieces, early works commissioned mainly by the church.