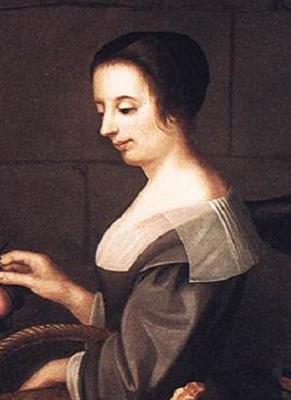 Louise Moillon (1610–1696) was a French painter in the Baroque era. She became known as one of the best still life painters during her time. Her work was purchased by King Charles I of England, as well as the French nobility.

Moillon was born into a strict Calvinist family in Paris in 1609 or 1610. She was one of seven children, one of whom was also a painter named Isaac Moillon; her father, Nicolas, was a landscape and portrait painter and an art dealer, and her mother, Marie Gilbert, was a daughter of a goldsmith. Moillon learned to paint from her father, however he died when she was 10 years old. The following year, Moillon's mother married another painter and art dealer, Francois Garnier. Garnier gave Moillon art lessons and continued her art education.

Moillon's family lived in the Saint-Germain-des-Prés neighbourhood of Paris, an area with many Protestant refugees from the Netherlands, including artists. These artists introduced Moillon to their traditional style of still life painting, which influenced the development of her particular style.

Moillon specialized in still-life painting exclusively. Her fruit or flowers on a table are sometimes accompanied by a human figure. Her work is characterized by stillness and acute detail, such as the texture of exotic fruit glowingly displayed against a dark background. That she was highly regarded by her contemporaries is demonstrated by the writing of Georges de Scudéry (1646) who placed her name alongside the still-life painters Jacques Linard and Peter van Boucle (Pieter van Boeckel), comparing all three to Michelangelo, Raphael, and Titian. In 1641, she collaborated with Boucle and Linard on a large composition of fruit and flowers. The majority of Moillon's paintings was executed in the 1630s, before her marriage in 1640 to Parisian timber merchant Etienne Girardot de Chancourt. Her last dated work is from 1674.

Approximately forty of her paintings survive today, most of which are signed Louyse Moillon. Four still-life paintings, once thought to be Moillon's, have now been reattributed to Osias Beert, a Flemish still life artist.

Mollion died of heart failure in 1696.