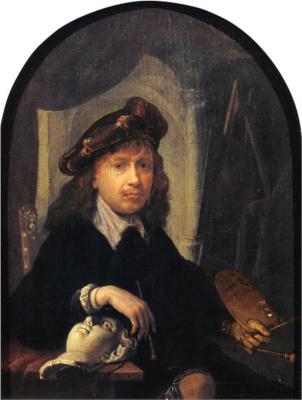 Gerrit Dou (7 April 1613 – 9 February 1675), also known as Gerard and Douw or Dow, was a Dutch Golden Age painter, whose small, highly polished paintings are typical of the Leiden fijnschilders. He specialised in genre scenes and is noted for his trompe l'oeil "niche" paintings and candlelit night-scenes with strong chiaroscuro. He was a student of Rembrandt.

Dou was born in Leiden, where his father was a manufacturer of stained-glass. He studied drawing under Bartholomeus Dolendo, and then trained in the stained-glass workshop of Pieter Couwenhorn. In February 1628, at the age of fourteen, his father sent him to study painting in the studio of Rembrandt (then aged about 21) who lived nearby. From Rembrandt, with whom he remained for about three years, he acquired his skill in colouring and in the more subtle effects of chiaroscuro, and his master's style is reflected in several of his earlier pictures, notably a self-portrait at the age of 22 in the Bridgewater Collection, and in the Blind Tobit going to meet his Son, at Wardour Castle [locations may be outdated].

At a comparatively early point in his career, however, he developed a distinctive manner of his own which diverged considerably from Rembrandt's, cultivating a minute and elaborate style of treatment. He is said to have spent five days in painting a hand, and his work was so fine that he found it necessary to manufacture his own brushes.

Notwithstanding the minuteness of his touch, the general effect was harmonious and free from stiffness, and his colour was always fresh and transparent. He often represented subjects in lantern or candle light, the effects of which he reproduced with an unparalleled fidelity and skill. He often painted with the aid of a concave lens combined with a convex mirror (the former sharpening perception, the latter providing a rightway-up image to paint from), and to obtain exactness looked at his subject through a frame crossed with squares of silk thread. His practice as a portrait painter, which was at first considerable, gradually declined, sitters being unwilling to give him the time that he deemed necessary. His pictures were always small in size. More than 200 are attributed to him, and examples are to be found in most of the major public collections of Europe. His chef-d'oeuvre is generally considered to be The dropsical woman (1663), and The Dutch Housewife (1650), both in the Louvre. The Evening School, in the Amsterdam Rijksmuseum, is the best example of the candlelight scenes in which he excelled. In the National Gallery, London, favorable specimens are to be seen in the Poulterer's Shop (1672), and a self-portrait (see above). Dou's pictures brought high prices, and one patron, Pieter Spiering, who acted as Swedish Ambassador in The Hague from the mid-1630s, paid him 500 guilders annually simply for the right of first refusal of his latest works. Queen Christina of Sweden owned eleven paintings by Dou, and Cosimo III de' Medici visited his house, where he may have bought at least one of the works now in the Uffizi. The Dutch royal court itself, however, preferred work of a more classical tendency.