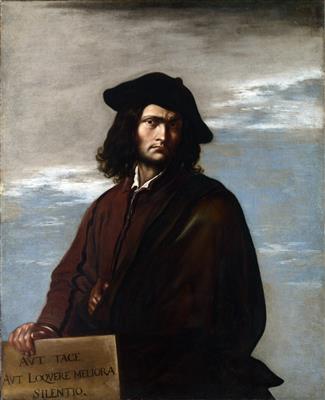 Salvator Rosa (June 20 or July 21, 1615 – March 15, 1673) was an Italian Baroque painter, poet, and printmaker, who was active in Naples, Rome, and Florence. As a painter, he is best known as "unorthodox and extravagant" as well as being a "perpetual rebel" and a proto-Romantic.

Rosa was born in Arenella, at that time in the outskirts of Naples, on either June 20 or July 21, 1615. His mother was Giulia Greca Rosa, a member of one of the Greek families of Sicily. His father, Vito Antonio de Rosa, a land surveyor, urged his son to become a lawyer or a priest, and entered him into the convent of the Somaschi Fathers. Yet Salvator showed a preference for the arts and secretly worked with his maternal uncle Paolo Greco to learn about painting. He soon transferred himself to the tutelage of his brother-in-law Francesco Fracanzano, a pupil of Ribera, and afterward to either Aniello Falcone, a contemporary of Domenico Gargiulo, or to Ribera. Some sources claim he spent time living with roving bandits. At the age of seventeen, his father died; his mother was destitute with at least five children and Salvator found himself without financial support and the head of a household looking to him for support.

He continued apprenticeship with Falcone, helping him complete his battlepiece canvases. In that studio, it is said that Lanfranco took notice of his work, and advised him to relocate to Rome, where he stayed from 1634–36.

Returning to Naples, he began painting haunting landscapes, overgrown with vegetation, or jagged beaches, mountains, and caves. Rosa was among the first to paint "romantic" landscapes, with a special turn for scenes of picturesque, often turbulent and rugged scenes peopled with shepherds, brigands, seamen, soldiers. These early landscapes were sold cheaply through private dealers.

He returned to Rome in 1638–39, where he was housed by Cardinal Francesco Maria Brancaccio, bishop of Viterbo. For the Chiesa Santa Maria della Morte in Viterbo, Rosa painted his first and one of his few altarpieces, the Incredulity of Thomas.

While Rosa had a facile genius at painting, he pursued a wide variety of arts: music, poetry, writing, etching, and acting. In Rome, he befriended Pietro Testa and Claude Lorrain. During a Roman carnival play he wrote and acted in a masque, in which his character bustled about Rome distributing satirical prescriptions for diseases of the body and more particularly, of the mind. In costume, he inveighed against the farcical comedies acted in the Trastevere under the direction of Bernini.

While his plays were successful, this activity also gained him powerful enemies among patrons and artists, including Bernini himself, in Rome. By late 1639, he had to relocate to Florence, where he stayed for eight years. In part, he had been invited by a Cardinal Gian Carlo de' Medici. Once there, Rosa sponsored a combination of studio and salon of poets, playwrights, and painters—the so-called Accademia dei Percossi (Academy of the Stricken). To the rigid art milieu of Florence, he introduced his canvases of wild landscapes; while influential, he gathered few true pupils. Another painter poet, Lorenzo Lippi, shared with Rosa the hospitality of the cardinal and the same circle of friends. Lippi encouraged him to proceed with the poem Il Malmantile Racquistato. He was well acquainted also with Ugo and Giulio Maffei, and was housed with them in Volterra, where he wrote four satires Music, Poetry, Painting, and War. About the same time he painted his own portrait, now in the National Gallery, London.