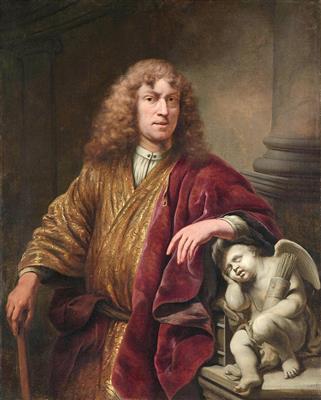 Ferdinand was born in Dordrecht as the son of a surgeon, Balthasar Bol. Ferdinand Bol was first an apprentice of Jacob Cuyp in his hometown and/or of Abraham Bloemaert in Utrecht. After 1630 he studied with Rembrandt, living in his house in Sint Antoniesbreestraat, then a fashionable street and area for painters, jewellers, architects, and many Flemish and Jewish immigrants. In 1641 Bol started his own studio.

Around this time, Bol was a popular and successful painter. His palette had lightened, his figures possessed greater elegance, and by the middle of the decade he was receiving more official commissions than any other artist in Amsterdam. Godfrey Kneller was his pupil. Bol delivered four paintings for the two mansions of the brothers Trip, originally also from Dordrecht.

Bol's first wife died in 1660. In 1669 Bol married for the second time to Anna van Erckel, widow of the treasurer of the Admiralty, and apparently retired from painting at that point in his life. In 1672 the couple moved to Keizersgracht 672, then a newly designed part of the city, and now the Museum Van Loon. Bol served as a governor in a Home for Lepers. Bol died a few weeks after his wife, on Herengracht, where his son, a lawyer, lived.

Probably his best known painting is a portrait of Elisabeth Bas, the wife of the naval officer Joachim Swartenhondt and an innkeeper near the Dam square. This and many other of his paintings would in the 19th century be falsely attributed to Rembrandt.