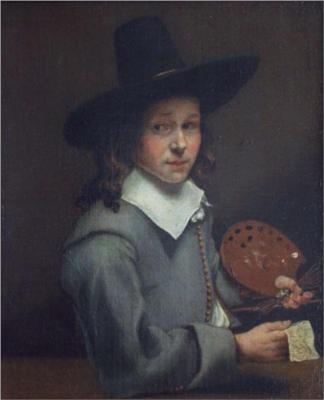 Self-portrait as a boy

Aelbert Jacobsz Cuyp (October 20, 1620 – November 15, 1691) was one of the leading Dutch landscape painters of the Dutch Golden Age in the 17th century. The most famous of a family of painters, the pupil of his father Jacob Gerritsz Cuyp (1594–1651/52), he is especially known for his large views of the Dutch countryside in early morning or late afternoon light.

Aelbert Cuyp was born in Dordrecht on October 20, 1620, and also died there on November 15, 1691. Known as the Dutch equivalent of Claude Lorrain, this landscape artist went on to inherit a considerable fortune. His family were all artists, with his uncle Benjamin and grandfather Gerrit being stained glass cartoon designers. Jacob Gerritsz Cuyp, his father, was a portraitist.

The amount of biographical information regarding Aelbert Cuyp is tremendously limited. Even Arnold Houbraken, a noted historian of Dutch Golden Age paintings and the sole authority on Cuyp for the hundred years following his death, paints a very thin biographical picture. His period of activity as a painter is traditionally limited to the two decades between 1639 and 1660, fitting directly within the generally accepted limits of the Dutch Golden Age's most significant period, 1640-1665. He is known to have been married to Cornelia Bosman in 1658, a date coinciding so directly with the end of his productivity as a painter that it has been accepted that his marriage played some sort of role in the end of his artistic career. The year after his marriage Cuyp became the deacon of the reformed church. Even Houbraken recalled that Cuyp was a devout Calvinist and the fact that when he died, there were no paintings of other artists found in his home.

The development of Aelbert Cuyp, who was trained as a landscape painter, may be roughly sketched in three phases based on the painters who most influenced him during that time and the subsequent artistic characteristics that are apparent in his paintings. Generally, Cuyp learned tone from the exceptionally prolific Jan van Goyen, light from Jan Both and form from his father, Jacob Gerritsz Cuyp.

Cuyp's "van Goyen phase" can be placed approximately in the early 1640s. Cuyp probably first encountered a painting by van Goyen in 1640 when van Goyen was, as Stephen Reiss points out "at the height of [his] powers." This is noticeable in the comparison between two of Cuyp's landscape paintings inscribed 1639 where no properly formed style is apparent and the landscape backgrounds he painted two years later for two of his father's group portraits that are distinctly van Goyenesque. Cuyp took from van Goyen the straw yellow and light brown tones that are so apparent in his Dunes (1629) and the broken brush technique also very noticeable in that same work. This technique, a precursor to impressionism, is noted for the short brush strokes where the colors are not necessarily blended smoothly. In Cuyp's River Scene, Two Men Conversing (1641) both of these van Goyen-influenced stylistic elements are noticeable

The next phase in the development of Cuyp's increasingly amalgamated style is due to the influence of Jan Both. In the mid-1640s Both, a native and resident of Utrecht, had just returned to his hometown from a trip to Rome. It is around this same time that Cuyp's style changed fundamentally. In Rome, Both had developed a new style of composition due, at least in part, to his interaction with Claude Lorrain. This new style was focused on changing the direction of light in the painting. Instead of the light being placed at right angles in relation to the line of vision, Both started moving it to a diagonal position from the back of the picture. In this new form of lighting, the artist (and viewer of the painting) faced the sun more or less contre-jour. Both, and subsequently Cuyp, used the advantages of this new lighting style to alter the sense of depth and luminosity possible in a painting. To make notice of these new capabilities, much use was made of elongated shadows. Cuyp was one of the first Dutch painters to appreciate this new leap forward in style and while his own Both-inspired phase was quite short (limited to the mid-1640s) he did, more than any other contemporary Dutch artist, maximize the full chromatic scale for sunsets and sunrises.