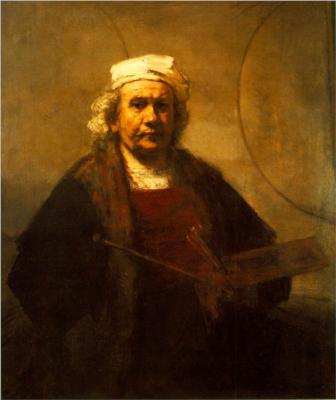 Considered the greatest painter in all of European Art, Rembrandt van Rijn was a Dutch painter and etcher of the Dutch Golden Age. As a child, he had an inclination towards painting, and spent three years under the apprenticeship of a local history painter. After another six month apprenticeship with painter Jan Pieter Lastman, he opened his own studio. He began taking art students at his studio at the ripe old age of twenty-one years old.

In 1631, Rembrandt moved to Amsterdam, which at the time was rapidly expanding, and had great success painting personal portraits. In 1634 he married his wife, Saskia van Uylenberg, and in the same year began taking art students in Amsterdam. Although his public life was on track, his private life was deteriorating. His wife Saskia had their first child, a boy, in 1635, but he died at two months of age. Their second child, a girl, died at three weeks of age. Their third child, another girl, died before she was a month old. It was only their fourth child, Titus, who would live into adulthood. Saskia herself died after Titus’ birth, possibly from consumption.

Although he lived an affluent lifestyle, Rembrandt lived far beyond his means. He had a large mortgage, and spent money on art, prints, and rarities, and avoided bankruptcy in 1656 only by selling many of his paintings and his collections of antiquities. Unfortunately, however, the sales price of his collection was disappointing, and he was forced to sell his house and printing press and move to a more modest location. Rembrandt outlived both his son Titus and his common-law wife Hendrickje, with whom he had a daughter Cornelia, and died in 1669. He was buried in an unmarked grave.

Due to Rembrandt’s practice of having his students copy his own work, and many stylistic evolutions and style experiments done by the artist, as well as bad restorations of his works, the attribution of Rembrandt’s works is very difficult. Many art historians disagree as to whether or not many of his works are true Rembrants. There is so much conjecture that there may never be a consensus. There is also conjecture by art historians that Rembrandt may have had stereo blindness, causing only one of his eyes to work. This would have further benefited his painting style by flattening out his perception in order to paint it on the canvas.

Rembrandt Harmenszoon van Rijn (/ˈrɛmbrænt, -brɑːnt/; Dutch: [ˈrɛmbrɑnt ˈɦɑrmə(n)soːn vɑn ˈrɛin] ( listen); 15 July 1606 – 4 October 1669) was a Dutch draughtsman, painter, and printmaker. An innovative and prolific master in three media, he is generally considered one of the greatest visual artists in the history of art and the most important in Dutch art history. Unlike most Dutch masters of the 17th century, Rembrandt's works depict a wide range of style and subject matter, from portraits and self-portraits to landscapes, genre scenes, allegorical and historical scenes, biblical and mythological themes as well as animal studies. His contributions to art came in a period of great wealth and cultural achievement that historians call the Dutch Golden Age, when Dutch art (especially Dutch painting), although in many ways antithetical to the Baroque style that dominated Europe, was extremely prolific and innovative, and gave rise to important new genres. Like many artists of the Dutch Golden Age, such as Jan Vermeer of Delft, Rembrandt was also known as an avid art collector and dealer.

Rembrandt never went abroad, but he was considerably influenced by the work of the Italian masters and Netherlandish artists who had studied in Italy, like Pieter Lastman, the Utrecht Caravaggists, and Flemish Baroque Peter Paul Rubens. Having achieved youthful success as a portrait painter, Rembrandt's later years were marked by personal tragedy and financial hardships. Yet his etchings and paintings were popular throughout his lifetime, his reputation as an artist remained high, and for twenty years he taught many important Dutch painters.

Rembrandt's portraits of his contemporaries, self-portraits and illustrations of scenes from the Bible are regarded as his greatest creative triumphs. His self-portraits form a unique and intimate biography, in which the artist surveyed himself without vanity and with the utmost sincerity. Rembrandt's foremost contribution in the history of printmaking was his transformation of the etching process from a relatively new reproductive technique into a true art form, along with Jacques Callot. His reputation as the greatest etcher in the history of the medium was established in his lifetime and never questioned since. Few of his paintings left the Dutch Republic whilst he lived, but his prints were circulated throughout Europe, and his wider reputation was initially based on them alone.

In his works he exhibited knowledge of classical iconography, which he molded to fit the requirements of his own experience; thus, the depiction of a biblical scene was informed by Rembrandt's knowledge of the specific text, his assimilation of classical composition, and his observations of Amsterdam's Jewish population. Because of his empathy for the human condition, he has been called "one of the great prophets of civilization". The French sculptor Auguste Rodin said, "Compare me with Rembrandt! What sacrilege! With Rembrandt, the colossus of Art! We should prostrate ourselves before Rembrandt and never compare anyone with him!" Francisco Goya, often considered to be among the last of the Old Masters, said "I have had three masters: Nature, Velázquez, and Rembrandt." Vincent van Gogh wrote, "Rembrandt goes so deep into the mysterious that he says things for which there are no words in any language. It is with justice that they call Rembrandt—magician—that's no easy occupation." The impressionist Max Liebermann said: "Whenever I see a Frans Hals, I feel like painting; whenever I see a Rembrandt, I feel like giving up".