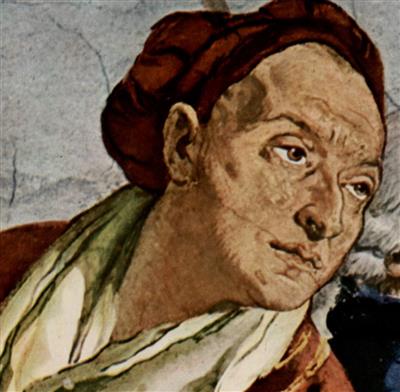 Giovanni Battista Tiepolo (Italian pronunciation: [dʒoˈvanni batˈtista ˈtjɛːpolo]; March 5, 1696 – March 27, 1770), also known as Gianbattista or Giambattista Tiepolo, was an Italian painter and printmaker from the Republic of Venice. He was prolific, and worked not only in Italy, but also in Germany and Spain.

Successful from the beginning of his career, he has been described by Michael Levey as "the greatest decorative painter of eighteenth-century Europe, as well as its most able craftsman."

Born in Venice, he was the youngest of six children of Domenico and Orsetta Tiepolo. His father was a small shipping merchant who belonged to a family that bore the prestigious patrician name of Tiepolo without claiming any noble descent. Some of the children acquired noble godparents, and Giambattista was originally named after his godfather, a Venetian nobleman called Giovanni Battista Dorià. He was baptised on 16 April 1696 in the local church, San Pietro di Castello (then still officially the cathedral of Venice). His father died about a year later, leaving his mother to bring up a family of young children, presumably in somewhat difficult circumstances.

In 1710 he became a pupil of Gregorio Lazzarini, a successful painter with an eclectic style. He was, though, at least equally strongly influenced by his study of the works of other contemporary artists such as Sebastiano Ricci and Giovanni Battista Piazzetta and those of his Venetian predecessors, especially Tintoretto and Veronese. A biography of his teacher, published in 1732, says that Tiepolo "departed from [Lazzarini's] studied manner of painting, and, all spirit and fire, embraced a quick and resolute style". His earliest known works are depictions of the apostles, painted in spandrels as part of the decoration of the church of the Ospedoletto in Venice in 1715–6. At about the same time he became painter to the Doge, Giovanni II Cornaro, and oversaw the hanging of pictures at his palace, as well as painting many works himself, of which only two portraits have been identified. He painted his first fresco in 1716, on the ceiling of a church at Biadene, near Treviso. He probably left Lazzarini's studio in 1717, the year he was received into the Fraglia or guild of painters.

In around 1719–20 he painted a scheme of frescoes for the wealthy, and recently ennobled, publisher Giambattista Baglione in the hall of his villa at Massanzago near Padua. Tiepolo depicted the Triumph of Aurora on the ceiling, and the Myth of Phaethon on the walls, creating the kind of fluid spatial illusion which was to become a recurring theme in his work.

In 1722 he was one of twelve artists commissioned to contribute a painting on canvas of one of the apostles as part of a decorative scheme for the nave of San Stae in Venice. The other artists involved included Ricci, Piazetta, and Pellegrini.

In 1719, Tiepolo married noblewoman Maria Cecilia Guardi, sister of two contemporary Venetian painters Francesco and Giovanni Antonio Guardi. Together, Tiepolo and his wife had nine children. Four daughters and three sons survived childhood. Two of his sons, Domenico and Lorenzo, painted with him as his assistants and later achieved some independent recognition. His children painted figures with a design similar to that of their father, but with distinctive, including genre, styles. His third son became a priest. Fabio Canal, Francesco Lorenzi, Domenico Pasquini were among his pupils.