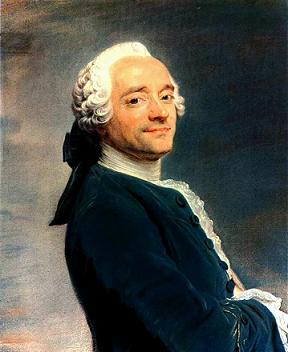 He was born in Saint-Quentin, Aisne, the third son of a musician, François de La Tour, a Laonnois and the son of a master mason, Jean de La Tour of Laon and Saint-Quentin who died in 1674. François de La Tour apparently was successively a trumpet-player for the rifle regiment of the duc du Maine, and musician to the master of the Collegiate Church of Saint-Quentin. He is popularly said to have disapproved of his son taking up the arts, but there is nothing to support that. According to François Marandet in 2002, an apprenticeship was arranged for La Tour with a painter named Dupouch from 12 October 1719, but it is not known when this contract was terminated. Little is known of Quentin de La Tour's background until, when barely nineteen, he went to Paris indefinitely, fleeing an indiscretion concerning his cousin, Anne Bougier; by this age he was claiming painting as his profession. After travelling briefly to England in 1725, he returned to Paris in 1727, where he was encouraged to begin working as a portraitist in pastels. His earliest known portrait, of which only an engraving by Langlois of 1731 is testament, was that of Voltaire.

In 1737 at the Paris Salon, La Tour exhibited the portraits of Madame Boucher, the wife of the painter François Boucher, and l'Auteur qui rit or Self-Portrait, Laughing (musée du Louvre), the first of a splendid series of 150 portraits that served as one of the glories of the Paris Salon for the next 36 years. Nevertheless, the painter Joseph Ducreux claimed to be his only student (although this is unlikely). On 25 May 1737 La Tour was officially recognised (agréé) by the Royal Academy of Painting and Sculpture, and soon attracted the attention of the French court. According to Jeffares, he had an apartment in the palais du Louvre in 1745, although his portraits for the royal family had ceased by the late 1760s. La Tour was popularly perceived as endowing his sitters with a distinctive charm and intelligence, while his delicate but sure touch with the pastel medium rendered a pleasing softness to their features.

As La Tour's wealth increased from his commissions, so did his philanthropy; he founded a school for drawing in his native Saint-Quentin and donated towards poor women in confinement, and disabled and ageing artisans and artists. He was also advisor and benefactor to the Royal Academy of Painting and Sculpture in Paris, and the Academy of Sciences and Belles Lettres of Amiens. Eventually confined to his home and the care of his brother, Jean-François, because of encroaching mental illness, he retired at the age of 80 to Saint-Quentin, where he died intestate at the age of 83 (he had revoked earlier wills). Jean-François de La Tour (d. 1807), chevalier de l'ordre royal militaire de Saint-Louis, was the natural heir to his estate.