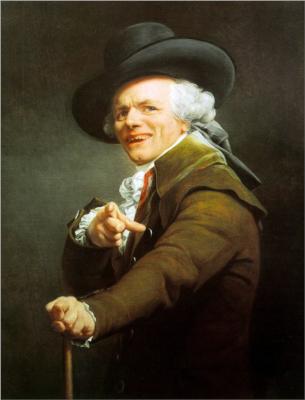 Joseph, Baron Ducreux (26 June 1735 – 24 July 1802) was a French noble, portrait painter, pastelist, miniaturist, and engraver, who was a successful portraitist at the court of Louis XVI of France, and resumed his career after the French Revolution. He was made a baron and premier peintre de la reine (First Painter to the Queen), and drew the last portrait ever made of Louis XVI before the king’s execution. His less formal portraits reflect his fascination with physiognomy and show an interest in expanding the range of facial expressions beyond those of official portraiture.

Born in Nancy, France, Ducreux may have trained with his father, who was also a painter. When Ducreux went to Paris in 1760, he trained as the only student of the pastelist Maurice Quentin de La Tour, who specialized in portraiture. Jean-Baptiste Greuze was an important influence on Ducreux's oil technique.

In 1769, Ducreux was sent to Vienna in order to paint a miniature of Marie Antoinette (shown left) before she left the city in 1770 and married Louis XVI of France. Ducreux was made a baron and premier peintre de la reine (First Painter to the Queen) in rewards for his services. Ducreux was given this appointment by Marie-Antoinette even though he was not a member of the Royal Academy of Painting and Sculpture, which had been founded in 1648. The academy was strictly hierarchical and the posts of first painter, ordinary painter and inspector or inspector general of royal factories were customarily reserved for members of the academy.

At the outbreak of the French Revolution, Ducreux traveled to London. There he drew the last portrait ever made of Louis XVI before the king's execution.

Jacques-Louis David became one of Ducreux's associates when the latter returned to Paris in 1793. David helped Ducreux continue an official career. Ducreux's residence became an informal salon for artists and musicians, who commissioned portraits from him. One of these musicians was his friend Étienne Méhul, who is said to have based the main character of one of his operas on Ducreux.

Ducreux had several children. His eldest son Jules was a painter and infantry captain who died in the Battle of Jemappes; several of his paintings still exist. His other sons died young. His eldest daughter, Rose-Adélaïde Ducreux, also became a painter, as it is said did his daughter Antoinette-Clémence.

Ducreux specialized in portrait painting, and his early portraits were done in pastel, and include those done of the connoisseurs Pierre-Jean Mariette, the Comte de Caylus and Ange-Laurent de la Live de July. These works may have been copies after De La Tour. From 1760 onward, Ducreux kept a list of his works, but throughout his lifetime, he rarely signed his paintings. Thus, many of his works remain erroneously attributed to other artists.

Other portraits by Ducreux include those done of Pierre Choderlos de Laclos and Maria Theresa of Austria, as well as those mentioned above of Louis XVI and Marie Antoinette. Ducreux also made several well-known self-portraits in the 1780s and 1790s, including one (now in the collection of the Getty Center in Los Angeles; c. 1783, right) in which he painted himself in the middle of a large yawn. In another, Portrait de l'artiste sous les traits d'un moqueur (c. 1793, Louvre; above right), the artist guffaws and points at the viewer.