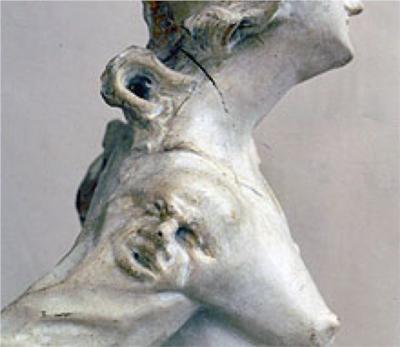 A face sculpted on a shoulder of 'Allegory of Courage'

Biographical details about him are scarce. He was discovered by Jan Bołoz Antoniewicz and appeared in scholarly literature in 1923 in the monograph of Władysław Żyła "Kościół i klasztor Dominikanów we Lwowie" ("Dominican church and monastery in Lviv"). His first and second name, some information about his family and approximate date of death were only established in 1993, with the discovery of registers of the Buchach Roman Catholic parish. The place and exact date of his birth remain unknown.

Pinsel came to the region of Lviv most probably around 1750 and became court artist to Mikołaj Bazyli Potocki. He settled in Buchach and in 1751 married Marianna Majewska, with whom he had two sons: Bernard and Antoni. He closely collaborated with the renowned architect Bernard Meretyn. His student was Maciej Polejowski.

His only work that survived intact, in its original spatial arrangement, is the facade of the St. George's Cathedral. His sculptural complexes in the churches in Horodenka and Monastyryska were almost completely destroyed between 1939 and 1989. The figures of the high altar in Hodovytsia have been saved thanks to efforts of the staff of the Lviv Art Gallery.