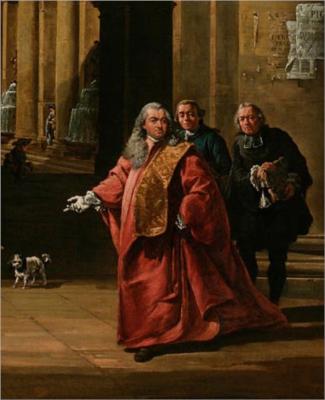 Bernardo Bellotto, (c. 1721/2 or 30 January 1721 – 17 November 1780), was an Italian urban landscape painter or vedutista, and printmaker in etching famous for his vedute of European cities (Dresden, Vienna, Turin and Warsaw). He was the pupil and nephew of the famous Giovanni Antonio Canal Canaletto and sometimes used the latter's illustrious name, signing himself as Bernardo Canaletto. In Germany and Poland, Bellotto called himself by his uncle's name, Canaletto.

Bellotto's style was characterized by elaborate representation of architectural and natural vistas, and by the specific quality of each place's lighting. It is plausible that Bellotto, and other Venetian masters of vedute, may have used the camera obscura in order to achieve superior precision of urban views.

Bellotto was born in Venice, the son of Lorenzo Antonio Bellotto and Fiorenza Canal, sister of the famous Canaletto, and studied in his uncle's workshop.

In 1742 he moved to Rome, where he produced vedute of that city. In 1744 and 1745 he traveled northern Italy, again depicting vedute of each city. Among others, he worked for Charles Emmanuel III of Savoy.

From 1747 to 1758 he moved to Dresden, following an invitation from King August III of Poland. He created paintings of the cities Dresden and Pirna and their surroundings. Today these paintings preserve a memory of Dresden's former beauty, which was destroyed by bombing during World War II.

His international reputation grew, and in 1758 he accepted an invitation from Empress Maria Theresa to come to Vienna, where he painted views of the city's monuments.

In 1761 Bellotto left Vienna for Munich, where he spent almost a year. In a letter to her cousin Maria Antonia of Bavaria, Empress Maria Theresia had praised Bellotto's artistic achievements at the Viennese court. Logically, he was commissioned works by the ruling family of Bavaria. He painted a panoramic view of Munich and two vedute of Nymphenburg Palace for the elector of Bavaria. At the end of 1761, Bellotto returned to Dresden.

When King August III of Poland, also an Elector of Saxony, who usually lived in Dresden, died in 1763, Bellotto's work became less important in Dresden. As a consequence, he left Dresden to seek employment in Saint Petersburg at the court of Catherine II of Russia. On his way to Saint Petersburg, however, Bellotto accepted an invitation in 1764 from Poland's newly elected King Stanislaus Augustus Poniatowski to become his court painter in Warsaw from 1768.

Here he remained some 16 years, for the rest of his life, as court painter to the King, for whom he painted numerous views of the Polish capital and its environs for the Royal Castle in Warsaw, complement of the great historical paintings commissioned by Poniatowski from Marcello Bacciarelli. His initial commissions included painted decoration of the Ujazdów Castle between 1767-1770, of which a study of illusionistic vault is the only preserved example of profuse decoration lost in 1784 during the reconstruction of the castle into military barracks.

In 1769 the painter and his son Lorenzo (1744-1770) accomplished another large royal commission - fourteen views of Rome, ancient and papal, based on the collection of etchings by Giovanni Battista Piranesi entitled Vedute di Roma. The collection was dispersed in the early nineteenth century and today various paintings can be admired in different museums in Russia - The Roman Forum as seen from the Capitol to the south-east and Piazza della Rotonda with Pantheon (Museum of Fine Arts in Moscow), View of the Piazza Navona (State Museum in Gorky), View of S. Maria Maggiore (Museum of Art in Khabarovsk) and in private collections.