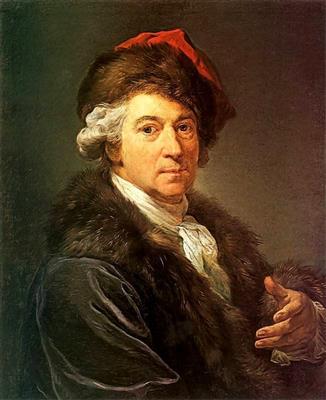 Self-Portrait in a Polish National Costume, after 1787

Marcello Bacciarelli was a Polish-Italian painter of the late-baroque and Neoclassic periods. Although born and bred in Italy, Bacciarelli spent most of his life in Poland, working for King Stanisław August Poniatowski. The Polish monarch was very ambitious and demanding. He had an extensive knowledge of art, enjoyed discussions and meddled in the artist’s work, giving him advice and correcting his sketches. Bacciarelli had a difficult job, yet he was able to meet the king’s expectations. He quickly won the trust and true friendship of Stanisław August Poniatowski. Having become the royal court painter in 1764, Bacciarelli was entrusted with all important artistic tasks, including the foundation of the first Polish painting school, called Malarnia. The artist also decorated the interiors of the royal palaces and was responsible for creating a gallery of paintings. Following the king’s order, Bacciarelli went on a trip to his native Italy to keep up with the latest trends in art and get in touch with other artists; however, he came back to Warsaw, where he and his family settled permanently. After the king had left the capital, the artist continued to take care of his collections, informing the monarch in detail about the progress of his works in many letters.
Bacciarelli usually painted portraits and history works illustrating the history of Poland. He produced many series of paintings decorating, for example, the Royal Castle in Warsaw. Their aim was to show the glory of the country as well as exemplary Polish citizens.

He was born in Rome, and studied there under Marco Benefial. In 1750, with the recommendation of the architect Gaetano Chiaveri, Marcello was recruited to Dresden in Saxony, where he was employed by Elected King Augustus III of Poland. After the death of King Augustus, Marcello went to Vienna, and thence to Warsaw. In Dresden, he met Bernardo Bellotto and worked with this Italian painter throughout his life. He was recruited by King Stanisław II Augustus in 1768 to become the Director of the newly founded Academy of Arts of Warsaw, as well as director of the Royal Buildings and Estates.

In Dresden, he married Federicka Richter, a woman painter known for miniature portraits. In Vienna, Marcello painted portraits of the imperial family. In Warsaw, he painted a set of portraits depicting nearly all Polish kings, from Bolesław I the Brave to the last king of the Polish-Lithuanian Commonwealth, Stanisław II Augustus who was also Bacciarelli's patron and admirer. He also made a portrait of Izabela Lubomirska in her wedding gown, that she commissioned years later after her marriage. Bacciarelli was also keen in painting culturally significant scenes from the history of Poland. Following the partitions of Poland and after Napoleon's rise to power he moved to the Duchy of Warsaw, a client state of the First French Empire and died in 1818.

A number of his paintings were painted for King Stanisław II Augustus of Poland and are in the Royal Castle in Warsaw. These include:

During Bacciarelli's early years in Warsaw, the young Alexander Kucharsky began to train as a painter in his studio. Another notable pupil of Bacciarelli's was Kazimierz Wojniakowski.