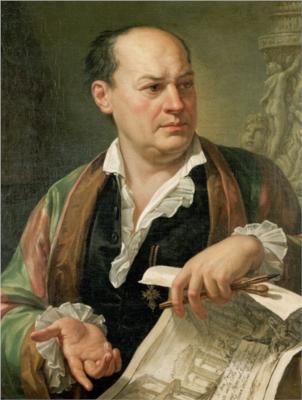 Piranesi was born in Mogliano Veneto, near Treviso, then part of the Republic of Venice. His father was a stonemason. His brother Andrea introduced him to Latin and the ancient civilization, and later he was apprenticed under his uncle, Matteo Lucchesi, who was a leading architect in Magistrato delle Acque, the state organization responsible for engineering and restoring historical buildings.

From 1740 he had an opportunity to work in Rome as a draughtsman for Marco Foscarini, the Venetian ambassador of the new Pope Benedict XIV. He resided in the Palazzo Venezia and studied under Giuseppe Vasi, who introduced him to the art of etching and engraving of the city and its monuments. Giuseppe Vasi found Piranesi's talent was beyond engraving. According to Legrand, Vasi told Piranesi that "you are too much of a painter, my friend, to be an engraver."

After his studies with Vasi, he collaborated with pupils of the French Academy in Rome to produce a series of vedute (views) of the city; his first work was Prima parte di Architettura e Prospettive (1743), followed in 1745 by Varie Vedute di Roma Antica e Moderna.

From 1743 to 1747 he sojourned mainly in Venice where, according to some sources, he often visited Giovanni Battista Tiepolo, a leading artist in Venice. It was Tiepolo who expanded the restrictive conventions of reproductive, topographical and antiquarian engravings. He then returned to Rome, where he opened a workshop in Via del Corso. In 1748–1774 he created a long series of vedute of the city which established his fame. In the meantime Piranesi devoted himself to the measurement of many of the ancient edifices: this led to the publication of Le Antichità Romane de' tempo della prima Repubblica e dei primi imperatori ("Roman Antiquities of the Time of the First Republic and the First Emperors"). In 1761 he became a member of the Accademia di San Luca and opened a printing facility of his own. In 1762 the Campo Marzio dell'antica Roma collection of engravings was printed.

The following year he was commissioned by Pope Clement XIII to restore the choir of San Giovanni in Laterano, but the work did not materialize. In 1764, one of Pope's nephews, Cardinal Rezzonico, appointed him to start his sole architectural works of importance, the restoration of the church of Santa Maria del Priorato in the Villa of the Knights of Malta, on Rome's Aventine Hill. He combined certain ancient architectural elements, trophies and escutcheons, with a venetian whimsicality for the facade of the church and the walls of the Piazza dei Cavalieri di Malta. This was the only time he expressed himself in actual marble and stone.

In 1767 he was made a knight of the Golden Spur, which enabled him henceforth to sign himself "Cav[aliere] Piranesi". In 1769 his publication of a series of ingenious and sometimes bizarre designs for chimneypieces, as well as an original range of furniture pieces, established his place as a versatile and resourceful designer. In 1776 he created his best known work as a 'restorer' of ancient sculpture, the Piranesi Vase, and in 1777–78 he published Avanzi degli Edifici di Pesto (Remains of the Edifices of Paestum).