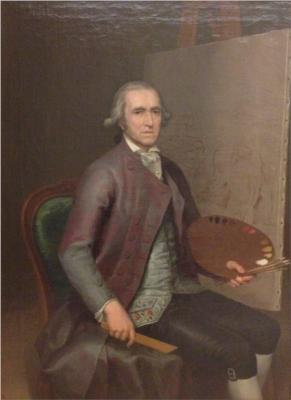 Francisco Bayeu y Subias (9 March 1734 – 4 August 1795) was a Spanish painter, active in a Neoclassic style, whose main subjects were religious and historical themes.

Born in Zaragoza, Aragon, he received a broad childhood education. His initial art studies were with a local master, José Luzán and Antonio González Velázquez. He then moved to Madrid, winning a scholarship with the painting of the ‘’Tyranny of Gerion’’ to study in the Academia Real de Bellas Artes de San Fernando. The death of his parents and the care of his brothers forced him to return to Zaragoza, until he was recalled by Anton Raphael Mengs to help decorate the Royal Palace of Madrid.

In later years, one of his colleagues was Francisco Goya, who married his sister, Josefa Bayeu. He served as court painter to King Charles III of Spain. He was named a professor of the Royal Academy of Fine Arts of San Fernando in 1765 and director in 1788. He painted in the Charterhouse of Aula Dei in Zaragoza. In 1767 he was named court painter for Charles III, king of Spain. He was involved in the decoration of various Royal palaces near Madrid. He helped provide designs for tapestries. He also painted for the College of San Ildefonso, the Royal Monastery of the Incarnation (Madrid), the Basilica of our Lady del Pilar in Zaragoza, and the cloister of the Cathedral of Toledo.

His brothers Ramón and Manuel Bayeu were also painters.