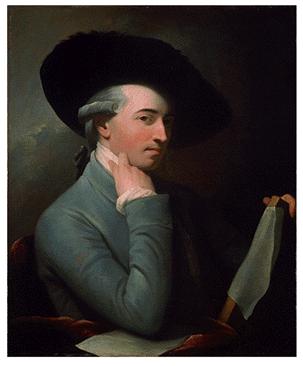 Benjamin West PRA (October 10, 1738 – March 11, 1820) was an Anglo-American history painter around and after the time of the American War of Independence and the Seven Years' War. He was the second president of the Royal Academy in London, serving from 1792 to 1805 and 1806 to 1820. He was offered a knighthood by the British Crown, but declined it, believing that he should instead be made a peer. He said that "Art is the representation of human beauty, ideally perfect in design, graceful and noble in attitude."

West was born in Springfield, Pennsylvania, in a house that is now in the borough of Swarthmore on the campus of Swarthmore College, as the tenth child of an innkeeper and his wife. The family later moved to Newtown Square, Pennsylvania, where his father was the proprietor of the Square Tavern, still standing in that town. West told the novelist John Galt, with whom, late in his life, he collaborated on a memoir, The Life and Studies of Benjamin West (1816, 1820) that, when he was a child, Native Americans showed him how to make paint by mixing some clay from the river bank with bear grease in a pot. Benjamin West was an autodidact; while excelling at the arts, "he had little [formal] education and, even when president of the Royal Academy, could scarcely spell".

From 1746 to 1759, West worked in Pennsylvania, mostly painting portraits. While West was in Lancaster in 1756, his patron, a gunsmith named William Henry, encouraged him to paint a Death of Socrates based on an engraving in Charles Rollin's Ancient History. His resulting composition, which significantly differs from the source, has been called "the most ambitious and interesting painting produced in colonial America". Dr William Smith, then the provost of the College of Philadelphia, saw the painting in Henry's house and decided to become West's patron, offering him education and, more importantly, connections with wealthy and politically connected Pennsylvanians. During this time West met John Wollaston, a famous painter who had immigrated from London. West learned Wollaston's techniques for painting the shimmer of silk and satin, and also adopted some of "his mannerisms, the most prominent of which was to give all his subjects large almond-shaped eyes, which clients thought very chic".

West was a close friend of Benjamin Franklin, whose portrait he painted. Franklin was the godfather of West's second son, Benjamin.

Sponsored by Smith and William Allen, then reputed to be the wealthiest man in Philadelphia, West traveled to Italy in 1760 in the company of the Scot William Patoun, a painter who later became an art collector. In common with many artists, architects, and lovers of the fine arts at that time he conducted a Grand Tour. West expanded his repertoire by copying works of Italian painters such as Titian and Raphael direct from the originals. In Rome he met a number of international neo-classical artists including German-born Anton Rafael Mengs, Scottish Gavin Hamilton, and Austrian Angelica Kauffman.