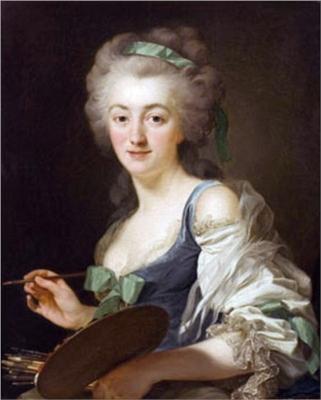 Anne Vallayer-Coster (21 December 1744 – 28 February 1818) was an 18th-century French painter best known for still lifes. She achieved fame and recognition very early in her career, being admitted to the Académie Royale de Peinture et de Sculpture in 1770, at the age of twenty-six.

Despite the low status that still life painting had at this time, Vallayer-Coster’s highly developed skills, especially in the depiction of flowers, soon generated a great deal of attention from collectors and other artists. Her “precocious talent and the rave reviews” earned her the attention of the court, where Marie Antoinette took a particular interest in Vallayer-Coster's paintings.

Her life was determinedly private, dignified and hard-working. She survived the bloodshed of the French Revolution, but the fall of the French monarchy, who were her primary patrons, caused her reputation to decline.

In addition to still lifes, she painted portraits and genre paintings, but because of the restrictions placed on women at the time her success at figure painting was limited.

Born in 1744 on the banks of the Bièvre near the Seine, Vallayer-Coster was one of four daughters born to a goldsmith of the royal family at Gobelines. The artist's family tapestry business might have had some influence on her interest and skill in art. Since her childhood was spent in the factory, she had the opportunity to experience the entire operation of the business. In 1754, her father moved the family to Paris. Vallayer-Coster seems not to have entered the studio of a professional painter, but instead received her training from a variety of sources, including her father, the botanical specialist Madeleine Basseport, and the celebrated marine painter Joseph Vernet.

By the age of twenty-six, Vallayer-Coster was still without a name or a sponsor; this proved to be a worrisome issue for her. Reluctantly, she submitted two of her still lifes—The Attributes of Painting and The Attributes of Music (both now in the holdings of the Louvre)—to the Académie Royale de Peinture et de Sculpture, as reception pieces in 1770. She was unanimously elected into the Royal Académie once the Academicians saw her paintings, making her one of only four women accepted into the Académie before the French Revolution. This moment of success however, was overshadowed by the death of her father. Immediately her mother took over the family business, quite commonly the case during this time, and Anne continued to work to help support her family.

Commenting on the Salon exhibit of 1771, the encyclopedist Denis Diderot noted that "if all new members of the Royal Academy made a showing like Mademoiselle Vallayer's, and sustained the same high level of quality, the Salon would look very different!" Though she is known for still life paintings in this period, she is also known for portraits, and her 1773 Portrait of a Violinist was purchased by the Nationalmuseum in 2015.

Vallayer-Coster exhibited her first floral still life in 1775, and subsequently became known especially as a painter of flowers. Four years later she began to enjoy the patronage of Marie Antoinette. With her Court connections and pressure from Marie Antoinette, she received space in the Louvre in 1781 which was unusual for women artists. Shortly thereafter, in the presence of Marie Antoinette at the courts of Versailles, she married Jean-Pierre Silvestre Coster, a wealthy lawyer, parlementaire, and respected member of a powerful family from Lorraine Marie Antoinette signed the marriage contract as witness. With these titles came the very highest ranks of the bourgeoisies, the noblesse de robe. With such a prestigious title came a state office which, traditionally during this time was bought from father to son, making them almost indistinguishable from the old nobility.