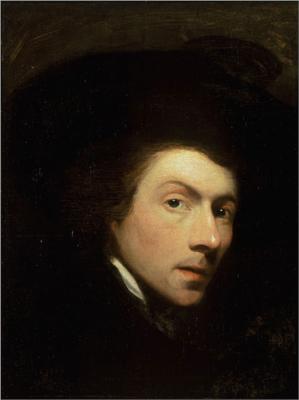 Gilbert Charles Stuart (born Stewart; December 3, 1755 – July 9, 1828) was an American painter from Rhode Island who is widely considered one of America's foremost portraitists. His best known work is the unfinished portrait of George Washington that is sometimes referred to as The Athenaeum, begun in 1796. Stuart retained the portrait and used it to paint 130 copies which he sold for $100 each. The image of George Washington featured in the painting has appeared on the United States one-dollar bill for more than a century and on various U.S. postage stamps of the 19th century and early 20th century.

Stuart produced portraits of more than 1,000 people, including the first six Presidents. His work can be found today at art museums throughout the United States and the United Kingdom, most notably the Metropolitan Museum of Art and Frick Collection in New York City, the National Gallery of Art in Washington, D.C., the National Portrait Gallery, London, Worcester Art Museum in Massachusetts, and the Museum of Fine Arts in Boston.

Gilbert Stuart was born on December 3, 1755 in Saunderstown, a village of North Kingstown in the Colony of Rhode Island and Providence Plantations, and he was baptized at Old Narragansett Church on April 11, 1756. He was the third child of Gilbert Stewart, a Scottish immigrant employed in the snuff-making industry, and Elizabeth Anthony Stewart, a member of a prominent land-owning family from Middletown, Rhode Island. Stuart's father owned the first snuff mill in America, which was located in the basement of the family homestead.

Stuart moved to Newport, Rhode Island at the age of six, where his father pursued work in the merchant field. In Newport, he first began to show great promise as a painter. In 1770, he made the acquaintance of Scottish artist Cosmo Alexander, a visitor to the colonies who made portraits of local patrons and who became a tutor to Stuart. Under the guidance of Alexander, Stuart painted the famous portrait Dr. Hunter's Spaniels when he was 14; it hangs today in the Hunter House Mansion in Newport.

In 1771, Stuart moved to Scotland with Alexander to finish his studies; however, Alexander died in Edinburgh one year later. Stuart tried to maintain a living and pursue his painting career, but to no avail, so he returned to Newport in 1773.

Stuart's prospects as a portraitist were jeopardized by the onset of the American Revolution and its social disruptions. He departed for England in 1775 following the example set by John Singleton Copley. He was unsuccessful at first in pursuit of his vocation, but he then became a protégé of Benjamin West with whom he studied for the next six years. The relationship was beneficial, with Stuart exhibiting at the Royal Academy as early as 1777.

By 1782, Stuart had met with success, largely due to acclaim for The Skater, a portrait of William Grant. It was Stuart's first full-length portrait and, according to art historian Margaret C. S. Christman, it "belied the prevailing opinion that Stuart 'made a tolerable likeness of a face, but as to the figure, he could not get below the fifth button'". Stuart said that he was "suddenly lifted into fame by a single picture".