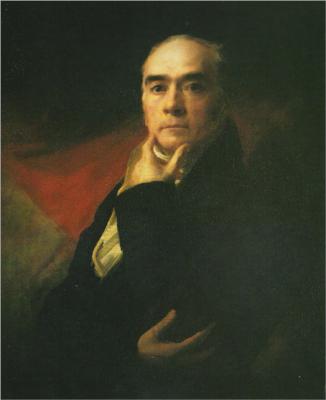 Raeburn was born the son of a manufacturer in Stockbridge, on the Water of Leith: a former village now within the city of Edinburgh. He had an older brother, born in 1744, called William Raeburn. His ancestors were believed to have been soldiers, and may have taken the name "Raeburn" from a hill farm in Annandale, held by Sir Walter Scott's family. Orphaned, he was supported by William and placed in Heriot's Hospital, where he received an education. At the age of fifteen he was apprenticed to the goldsmith James Gilliland of Edinburgh, and various pieces of jewellery, mourning rings and the like, adorned with minute drawings on ivory by his hand, still exist. Soon he took to the production of carefully finished portrait miniatures; meeting with success and patronage, he extended his practice to oil painting, at which he was self-taught. Gilliland watched the progress of his pupil with interest, and introduced him to David Martin, who had been the favourite assistant of Allan Ramsay the Latter, and was now the leading portrait painter in Edinburgh. Raeburn was especially aided by the loan of portraits to copy. Soon he had gained sufficient skill to make him decide to devote himself exclusively to painting. George Chalmers (1776; Dunfermline Town Hall) is his earliest known portrait.

In his early twenties, Raeburn was asked to paint the portrait of a young lady he had noticed when he was sketching from nature in the fields. Ann was the daughter of Peter Edgar of Bridgelands, and widow of Count James Leslie of Deanhaugh. Fascinated by the handsome and intellectual young artist, she became his wife within a month, bringing him an ample fortune. The acquisition of wealth did not affect his enthusiasm or his industry, but spurred him on to acquire a thorough knowledge of his craft. It was usual for artists to visit Italy, and Raeburn set off with his wife. In London he was kindly received by Sir Joshua Reynolds, the president of the Royal Academy, who advised him on what to study in Rome, especially recommending the works of Michelangelo, and gave Raeburn letters of introduction for Italy. In Rome he met his fellow Scot Gavin Hamilton, Pompeo Girolamo Batoni and Byers, an antique dealer whose advice proved particularly useful, especially the recommendation that "he should never copy an object from memory, but, from the principal figure to the minutest accessory, have it placed before him." After two years of study in Italy he returned to Edinburgh in 1787, and began a successful career as a portrait painter. In that year he executed a seated portrait of the second Lord President Dundas.

Examples of his earlier portraiture include a bust of Mrs Johnstone of Baldovie and a three-quarter-length of Dr James Hutton: works which, if somewhat timid and tentative in handling and not as confident as his later work, nevertheless have delicacy and character. The portraits of John Clerk, Lord Eldin, and of Principal Hill of St Andrews belong to a later period. Raeburn was fortunate in the time in which he practised portraiture. Sir Walter Scott, Hugh Blair, Henry Mackenzie, Lord Woodhouselee, William Robertson, John Home, Robert Fergusson, and Dugald Stewart were resident in Edinburgh, and were all painted by Raeburn. Mature works include his own portrait and that of the Rev. Sir Henry Moncrieff Wellwood, a bust of Dr Wardrop of Torbane Hill, two full-lengths of Adam Rolland of Gask, the remarkable paintings of Lord Newton and Dr Alexander Adam in the National Gallery of Scotland, and that of William Macdonald of St Martin's. Apart from himself, Raeburn painted only two artists, one of whom was Sir Francis Leggatt Chantrey, the most important and famous British sculptor of the first half of the 19th century. It has recently been revealed that Raeburn and Chantrey were close friends and that Raeburn took exceptional care over the execution of his portrait of the sculptor, one of the painter's mature bust-length masterpieces.