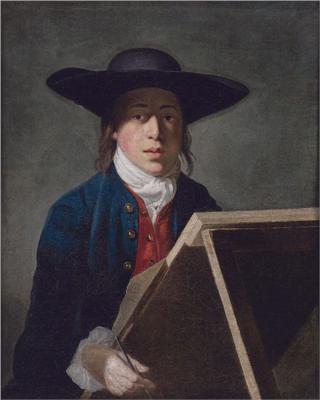 George Morland was born in London on 26 June 1763. He was the son of Henry Robert Morland, and grandson of George Henry Morland, said by Cunningham to have been lineally descended from Sir Samuel Morland, while other biographers go so far as to say that he had only to claim the baronetcy in order to get it. Morland began to draw at the age of three years, and at the age of ten (1773) his name appears as an honorary exhibitor of sketches at the Royal Academy. He continued to exhibit at the Free Society in 1775 and 1776, and at the Society of Artists in 1777, and then again at the Royal Academy in 1778, 1779 and 1780.

His talents were carefully cultivated by his father, who was accused of stimulating them unduly with a view to his own profit, shutting the child up in a garret to make drawings from pictures and casts for which he found a ready sale. The boy, on the other hand, is said to have soon found a way to make money for himself by hiding some of his drawings, and lowering them at nightfall out of his window to young accomplices, with whom he used to spend the proceeds in frolic and self-indulgence. It has been also asserted that his father, discovering this trick, tried to conciliate him by indulgence, humouring his whims and encouraging his low tastes.

He was set by his father to copy pictures of all kinds, but especially of the Dutch and Flemish masters. Among others he copied Fuseli's Nightmare and Reynolds's Garrick between Tragedy and Comedy. He was also introduced to Sir Joshua Reynolds, and obtained permission to copy his pictures, and all accounts agree that before he was seventeen he had obtained considerable reputation not only with his friends and the dealers, but among artists of repute. A convincing proof of the skill in original composition which he had then attained is the fine engraving by William Ward, after his picture of The Angler's Repast, which was published in November 1780 by John Raphael Smith. It is said that before his apprenticeship to his father came to an end, in 1784, Romney offered to take him into his own house, with a salary of £300, on condition of his signing articles for three years. But Morland, we are told, had had enough of restraint, and after a rupture with his father he set up on his own account in 1784 or 1785 at the house of a picture dealer, and commenced that life which, in its combination of hard work and hard drinking, is almost without a parallel.

Morland soon became the mere slave of the dealer with whom he lived. His boon companions were "ostlers, potboys, horse jockeys, moneylenders, pawnbrokers, punks, and pugilists." In this company the handsome young artist swaggered, dressed in a green coat, with large yellow buttons, leather breeches, and top boots. "He was in the very extreme of foppish puppeyism", says Hassell; "his head, when ornamented according to his own taste, resembled a snowball, after the model of Tippey Bob, of dramatic memory, to which was attached a short, thick tail, not unlike a painter's brush." His youth and strong constitution enabled him to recover rapidly from his excesses, and he not only employed the intervals in painting, but at this time, or shortly afterwards, taught himself to play the violin. He made also an effort, and a successful one, to free himself from his task-master, and escaped to Margate, where he painted miniatures for a while. In 1785 he paid a short visit to France, whither his fame had preceded him, and where he had no lack of commissions.