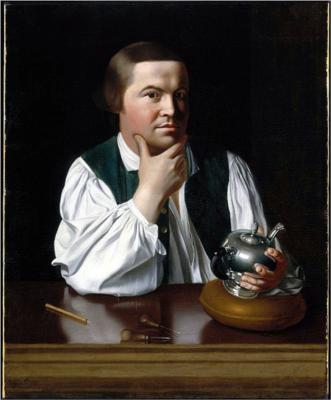 Paul Revere (/rɪˈvɪər/; December 21, 1734 O.S. – May 10, 1818) was an American silversmith, engraver, early industrialist, and Patriot in the American Revolution. He is best known for his midnight ride to alert the colonial militia in April 1775 to the approach of British forces before the battles of Lexington and Concord, as dramatized in Henry Wadsworth Longfellow's poem, "Paul Revere's Ride" (1861).

At age 41, Revere was a prosperous, established and prominent Boston silversmith. He had helped organize an intelligence and alarm system to keep watch on the British military. Revere later served as a Massachusetts militia officer, though his service ended after the Penobscot Expedition, one of the most disastrous campaigns of the American Revolutionary War, for which he was absolved of blame.

Following the war, Revere returned to his silversmith trade. He used the profits from his expanding business to finance his work in iron casting, bronze bell and cannon casting, and the forging of copper bolts and spikes. In 1800 he became the first American to successfully roll copper into sheets for use as sheathing on naval vessels.

Revere was born in the North End of Boston on December 21, 1734, according to the Old Style calendar then in use, or January 1, 1735, in the modern calendar. His father, a French Huguenot born Apollos Rivoire came to Boston at the age of 13 and was apprenticed to the silversmith John Coney. By the time he married Deborah Hitchborn, a member of a long-standing Boston family that owned a small shipping wharf, in 1729, Rivoire had anglicized his name to Paul Revere. Their son, Paul Revere, was the third of 12 children and eventually the eldest surviving son. Revere grew up in the environment of the extended Hitchborn family, and never learned his father's native language. At 13 he left school and became an apprentice to his father. The silversmith trade afforded him connections with a cross-section of Boston society, which would serve him well when he became active in the American Revolution. As for religion, although his father attended Puritan services, Revere was drawn to the Church of England. Revere eventually began attending the services of the political and provocative Jonathan Mayhew at the West Church. His father did not approve, and as a result father and son came to blows on one occasion. Revere relented and returned to his father's church, although he did become friends with Mayhew, and returned to the West Church in the late 1760s.

Revere's father died in 1754, when Paul was legally too young to officially be the master of the family silver shop. In February 1756, during the French and Indian War (the North American theater of the Seven Years' War), he enlisted in the provincial army. Possibly he made this decision because of the weak economy, since army service promised consistent pay. Commissioned a second lieutenant in a provincial artillery regiment, he spent the summer at Fort William Henry at the southern end of Lake George in New York as part of an abortive plan for the capture of Fort St. Frédéric. He did not stay long in the army, but returned to Boston and assumed control of the silver shop in his own name. On August 4, 1757, he married Sarah Orne (1736–1773); their first child was born eight months later. He and Sarah had eight children, but two died young, and only one, Mary, survived her father.