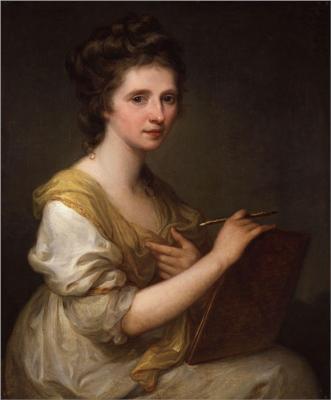 Maria Anna Angelika Kauffmann RA (30 October 1741 – 5 November 1807), usually known in English as Angelica Kauffman, was a Swiss Neoclassical painter who had a successful career in London and Rome. Remembered primarily as a history painter, Kauffmann was a skilled portraitist, landscape and decoration painter. She was one of the two female founding members of the Royal Academy in London in 1768.

Kauffman was born at Chur in Graubünden, Switzerland. Her family moved to Morbegno in 1742, then Como in Lombardy in 1752 at that time under Austrian rule. In 1757 she accompanied her father to Schwarzenberg in Vorarlberg/Austria where her father was working for the local bishop. Her father, Joseph Johann Kauffmann, was a relatively poor man but a skilled Austrian muralist and painter, who was often traveling for his work. He trained Angelica and she worked as his assistant, moving through Switzerland, Austria, and Italy. Angelica, a child prodigy, rapidly acquired several languages from her mother, Cleophea Lutz, including German, Italian, French and English. She also showed talent as a musician and was forced to choose between opera and art. She quickly chose art as a Catholic priest told Kauffman that the opera was a dangerous place filled with "seedy people." By her twelfth year she had become known as a painter, with bishops and nobles being her sitters.

In 1754, her mother died and her father decided to move to Milan. Later visits to Italy of long duration followed. She became a member of the Accademia di Belle Arti di Firenze in 1762. In 1763 she visited Rome, returning again in 1764. From Rome she passed to Bologna and Venice, everywhere feted for her talents and charm. Writing from Rome in August 1764 to his friend Franke, Winckelmann refers to her popularity; she was then painting his picture, a half-length; of which she also made an etching. She spoke Italian as well as German, he says, and expressed herself with facility in French and English - one result of the last-named accomplishment being that she became a popular portraitist for British visitors to Rome. "She may be styled beautiful," he adds, "and in singing may vie with our best virtuosi". In 1765, her work appeared in England in an exhibition of the Free Society of Artists. She moved to England shortly after and established herself as a leading artist.

While in Venice, Kauffman was persuaded by Lady Wentworth, the wife of the British ambassador, to accompany her to London. One of the first pieces she completed in London was a portrait of David Garrick, exhibited in the year of her arrival at "Mr Moreing's great room in Maiden Lane." The rank of Lady Wentworth opened society to her, and she was everywhere well received, the royal family especially showing her great favor. Her firmest friend, however, was Sir Joshua Reynolds. In his pocket-book her name as "Miss Angelica" or "Miss Angel" appears frequently; and in 1766 he painted her, a compliment which she returned by her Portrait of Sir Joshua Reynolds. Another instance of her intimacy with Reynolds is to be found in her variation of Guercino's Et in Arcadia ego, a subject which Reynolds repeated a few years later in his portrait of Mrs Bouverie and Mrs Crewe.