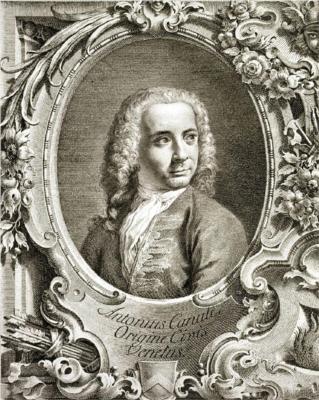 Giovanni Antonio Canal (18 October 1697 – 19 April 1768), better known as Canaletto (Italian: [kanaˈletto]), was an Italian painter of city views or vedute, of Venice, Rome, and London. He also painted imaginary views (referred to as capricci), although the demarcation in his works between the real and the imaginary is never quite clearcut. He was further an important printmaker using the etching technique. In the period from 1746 to 1756 he worked in England where he painted many sights of London. He was highly successful in England, thanks to the British merchant and connoisseur Joseph Smith, whose large collection of Canaletto's works was sold to King George III in 1762.

He was born in Venice as the son of the painter Bernardo Canal, hence his mononym Canaletto ("little Canal"), and Artemisia Barbieri. Canaletto served his apprenticeship with his father and his brother. He began in his father's occupation, that of a theatrical scene painter. Canaletto was inspired by the Roman vedutista Giovanni Paolo Pannini, and started painting the daily life of the city and its people.

After returning from Rome in 1719, he began painting in his topographical style. His first known signed and dated work is Architectural Capriccio (1723, Milan, in a private collection). Studying with the older Luca Carlevarijs, a well-regarded painter of urban cityscapes, he rapidly became his master's equal.

In 1725, the painter Alessandro Marchesini, who was also the buyer for the Lucchese art collector Stefano Conti, had inquired about buying two more 'views of Venice', when the agent urged him to consider instead the work of "Antonio Canale... it is like Carlevaris, but you can see the sun shining in it."

Much of Canaletto's early artwork was painted "from nature", differing from the then customary practice of completing paintings in the studio. Some of his later works do revert to this custom, as suggested by the tendency for distant figures to be painted as blobs of colour – an effect possibly produced by using a camera obscura, which blurs farther-away objects – although research by art historians working for the Royal Collection in the United Kingdom has shown Canaletto almost never used a camera obscura.

However, his paintings are always notable for their accuracy: he recorded the seasonal submerging of Venice in water and ice.

Canaletto's early works remain his most coveted and, according to many authorities, his best. One of his early pieces is The Stonemason's Yard (c. 1725, the National Gallery, London) which depicts a humble working area of the city. It is regarded one of his finest works and was presented by Sir George Beaumont in 1823 and 1828.

Later Canaletto painted grand scenes of the canals of Venice and the Doge's Palace. His large-scale landscapes portrayed the city's pageantry and waning traditions, making innovative use of atmospheric effects and strong local colours. For these qualities, his works may be said to have anticipated Impressionism.

His graphic print S. A. Giustina in Prà della Vale was found in the 2012 Nazi loot discovery.

Many of his pictures were sold to Englishmen on their Grand Tour, often through the agency of the merchant Joseph Smith (who was later appointed British Consul in Venice in 1744). It was Smith who acted as an agent for Canaletto, first in requesting paintings of Venice from the painter in the early 1720s and helping him to sell his paintings to other Englishmen.