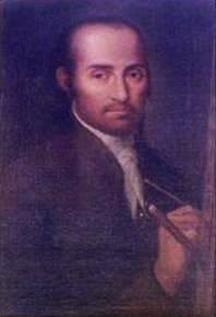 Miguel Mateo Maldonado y Cabrera (1695–1768) was a painter from the Viceroyalty of New Spain, in today's Mexico. During his lifetime, he was recognized as the greatest painter in all of New Spain. He created religious and secular art for the Catholic Church and wealthy patrons. His casta paintings, depicting interracial marriage among Amerindians, Spaniards and Africans, are considered the genre's finest.

Cabrera was born in Antequera, today's Oaxaca, Oaxaca, and moved to Mexico City in 1719. He may have studied under the Rodríguez Juárez brothers or José de Ibarra.

Cabrera was a favorite painter of the city's Archbishop and of the Jesuit order, which earned him many commissions. His work was influenced by Bartolomé Estéban Murillo and the French painting of his time.

Miguel is currently most famous for his casta paintings. One of the sixteen in the set that was missing for many years was purchased by the Los Angeles County Museum of Art. The museum received information that the last of the sixteen, thought lost, may be in Los Angeles, California.

He is also known for his portrait of the seventeenth-century poet Sor Juana Inés de la Cruz. He also executed one of the first portraits of St. Juan Diego. In 1752 he was permitted access to the icon of Our Lady of Guadalupe to make three copies: one for Archbishop José Manuel Rubio y Salinas, one for the Pope, and a third to use as a model for further copies.

In 1756 he created an important early study of the icon of Our Lady of Guadalupe, Maravilla americana y conjunto de raras maravillas observadas con la dirección de las reglas del arte de la pintura ("American marvel and ensemble of rare wonders observed with the direction of the rules of the art of painting", often referred to in English simply as American Marvel).

The essential purpose of Maravilla Americana was to affirm the 1666 opinions of the witnesses who swore that the image of the Virgin was of a miraculous nature. However, he also elaborated a novel opinion: the image was crafted with a unique variety of techniques. He contended that the Virgin's face and hands were painted in oil paint, while her tunic, mandorla, and the cherub at her feet were all painted in egg tempera. Finally, her mantle was executed in gouache. He observed that the golden rays emanating from the Virgin seemed to be of dust that was woven into the very fabric of the canvas, which he asserted was of "a coarse weave of certain threads which we vulgarly call pita," a cloth woven from palm fibers.

In 1753, he founded the second Academy of Painting in Mexico City and served as its director.

Most of the rest of his works are also religious in nature, although as the official painter of the Archbishop of Mexico, Cabrera painted his and other portraits.

In the 19th century, the writer José Bernardo Couto (es) called him "the personification of the great artist and of the painter par excellence; and a century after his death the supremacy which he knew how to merit remains intact." His remains are interred at the Church of Santa Inés in Mexico City.