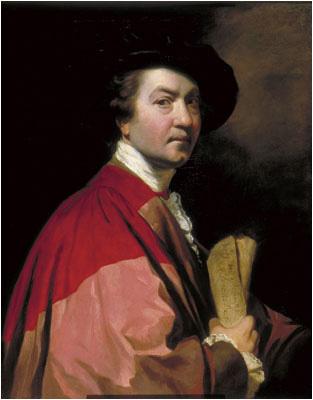 Sir Joshua Reynolds RA FRS FRSA (16 July 1723 – 23 February 1792) was an English painter, specialising in portraits. John Russell said he was one of the major European painters of the 18th Century. He promoted the "Grand Style" in painting which depended on idealization of the imperfect. He was a founder and first president of the Royal Academy of Arts, and was knighted by George III in 1769.

Reynolds was born in Plympton, Devon, on 16 July 1723 the third son of the Rev. Samuel Reynolds, master of the Plympton Free Grammar School in the town. His father had been a fellow of Balliol College, Oxford, but did not send any of his sons to the university. One of his sisters was Mary Palmer (1716–1794), seven years his senior, author of Devonshire Dialogue, whose fondness for drawing is said to have had much influence on him when a boy. In 1740 she provided £60, half of the premium paid to Thomas Hudson the portrait-painter, for Joshua's pupilage, and nine years later advanced money for his expenses in Italy. His other siblings included Frances Reynolds and Elizabeth Johnson.

As a boy, he came under the influence of Zachariah Mudge, whose Platonistic philosophy stayed with him all his life. Reynolds made extracts in his commonplace book from Theophrastus, Plutarch, Seneca, Marcus Antonius, Ovid, William Shakespeare, John Milton, Alexander Pope, John Dryden, Joseph Addison, Richard Steele, Aphra Behn, and passages on art theory by Leonardo da Vinci, Charles Alphonse Du Fresnoy, and André Félibien. The work that came to have the most influential impact on Reynolds was Jonathan Richardson's An Essay on the Theory of Painting (1715). Reynolds' annotated copy was lost for nearly two hundred years until it appeared in a Cambridge bookshop, inscribed with the signature ‘J. Reynolds Pictor’, and is now in the collection of the Royal Academy of Arts, London.

Having shown an early interest in art, Reynolds was apprenticed in 1740 to the fashionable London portrait painter Thomas Hudson, who had been born in Devon. Hudson had a collection of Old Master drawings, including some by Guercino, of which Reynolds made copies. Although apprenticed to Hudson for four years, Reynolds only remained with him until summer 1743. Having left Hudson, Reynolds worked for some time as a portrait-painter in Plymouth Dock (now Devonport). He returned to London before the end of 1744, but following his father's death in late 1745 he shared a house in Plymouth Dock with his sisters.

In 1749, Reynolds met Commodore Augustus Keppel, who invited him to join HMS Centurion, of which he had command, on a voyage to the Mediterranean. While with the ship he visited Lisbon, Cadiz, Algiers, and Minorca. From Minorca he travelled to Livorno in Italy, and then to Rome, where he spent two years, studying the Old Masters and acquiring a taste for the "Grand Style". Lord Edgcumbe, who had known Reynolds as a boy and introduced him to Keppel, suggested he should study with Pompeo Batoni, the leading painter in Rome, but Reynolds replied that he had nothing to learn from him. While in Rome he suffered a severe cold, which left him partially deaf, and, as a result, he began to carry a small ear trumpet with which he is often pictured.