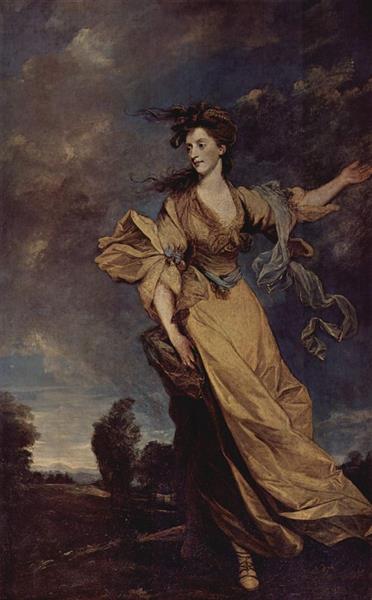 Joshua Reynolds developed a daring pose to depict Lady Jane Tollemache, the youngest daughter of the 4th Earl of Dysart and Lady Grace Carteret. Jane is positioned off-centre, as if she is walking out of the frame, emphasising the movement of the wind, hair and drapery. These details were much criticised when the portrait was shown at the Royal Academy exhibition in 1779.

Jane's first husband was John Delap Halliday of Leasowes, Shropshire, whom she married on 23 October 1771. He was the son of a rich Scottish planter in the Caribbean and was a major in the army. It has been suggested that the background is a composite of the landscape around the Leasowes estate in Shropshire, also known for its high winds, but Reynolds may have simply used the device to add drama to his composition.
The composition may be a flamboyant reworking of an earlier portrait, 'Mrs Hale as "Euphosyne"' (Harewood House) that was loosely based on a print of Raphael's 'St Margaret'. The dramatic pose does make this portrait close to Reynolds's subject paintings which depict characters from history or mythology. A good example is Reynolds's 'Thais' which Ferdinand de Rothschild also bought from the Tollemache family.
Reynolds's innovations were not always appreciated by his contemporaries. When the painting was displayed in public at the Royal Academy exhibition in 1779, one critic wrote: 'No 250 is a lady in a storm, her hair blows one way, and her neck ornaments the contrary, and the neck swells out too much on the left side'. Another wrote 'We do not know why this lady should choose to be drawn in a high wind, as it does not discover anything formed by the Graces'. The reference to 'Graces' refers to Jane's mother Grace Carteret, and probably to her other two sisters Louisa and Frances.
The longevity of the critics' opinion is perhaps measured in a later print of around 1810 by the satirist James Gillray. This print shows three ladies attempting to keep their skirts from being blown up, with the caption: 'The graces in a high wind'. One pose in particular may have been loosely based on Reynolds's portrait of Jane, known through a mezzotint published in 1779.