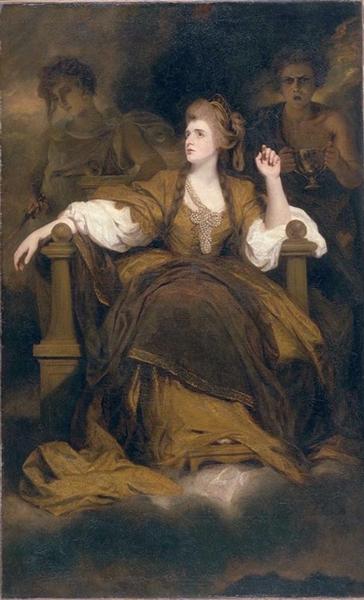 Mrs Siddons as the Tragic Muse

Reynolds's portrait immediately confirmed Mrs Siddons's status as the greatest tragic actor of her day. He presents her not merely in a theatrical role, but as the embodiment of Melpomene, the muse of tragedy. Behind her are figures representing terror (right) and pity. Her pose recalls the figure of prophet Isaiah from Michelangelo's Sistine Ceiling, but Mrs Siddons insisted she had composed it spontaneously herself. This is one of three versions Reynolds made of the portrait.

Sarah Siddons as the Tragic Muse is a 1784 oil painting by Joshua Reynolds.

Sarah Siddons was a well-known actress of the 18th century who became famous for her role as Shakespeare's Lady Macbeth. Born Sarah Kemble, aged 18 she married William Siddons, also an actor, and they had seven children of who only two survived.

Sarah's parents sent her to work as a lady's maid and with this job she was exposed to the works of England's literary greats such as Milton and Shakespeare. She also began acting and had a natural ability.

Eventually her marriage to William became strained and they separated from each other on their own terms.

Her acting career prospered and she was offered a position at Drury Lane where she became infamous for her role as the Queen of Tragedy and eventually was the leading actress at the theater. It has been said she funneled all of her sorrows from the death of her five children and her unhappy marriage into her acting and was invited to do private performances for the royal family.

Mrs. Siddons mixed with the well-to-do society of England throughout her life as well as knowing numerous playwrights and acting alongside the famous actor David Garrick, who was also frequently painted by Reynolds and Gainsborough.

Melpoméne is a character from Greek and Roman mythology, one of nine muses of the arts. She was originally the Muse of Song but then became the Muse of Tragedy. Singing was often utilized in Greek tragedies, which is how the transition from Melpoméne's identification with song shifted to tragedy.

The name Melpoméne comes from the Greek word melpo or melpomai, which means "to celebrate with dance and song. "In many statues and paintings of Melpoméne, she is represented with a tragic mask and also often holds in her other hand a knife or club.

Reynolds was inspired not only by Sarah Siddons' extreme talent to embody the tragic heroine in Macbeth, but also by the Classical subject matter of the muses from ancient Greek/Roman mythologies that numerous sculptors tried to create. Reynolds painted Siddons as Melpomene, the muse of tragedy.

This work was painted when Mrs. Siddons was 28 years old and in the prime of her career. When she entered Reynolds' studio he took her by the hand and said, "Ascend upon your undisputed throne, and graciously bestow upon me some great idea of the Tragic Muse".