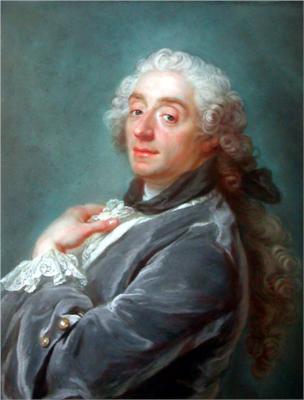 Possibly the most popular 18th century artist, Francois Boucher was a French painter in the Rococo style. When he was 17 years old, Boucher was apprenticed for a short time to the French painter Francois Lemoyne, and then to the engraver Jean-Francois Cars. After three years of work and artistic study, Boucher won the Grand Prix de Rome, a scholarship for artistic study, allowing him to travel to Italy and further his study in art. Upon his return to France, he was accepted into the Royal Academy of Painting and Sculpture, and three years later became a faculty member.

His painting career accelerated rapidly, and he was promoted to the Rector of the Academy, then head of the Royal Gobelins Manufacturing Company, and later First Painter to the King, Louis XV. His most prominent during his stay at the court, indeed in his entire career, was Madame de Pompadour, the mistress to King Louis XV, of whom he painted several portraits.

Many of his paintings depicted idyllic pastoral scenes or classical historical paintings, but his more risqué odalisque paintings in his later career led to many attacks on his moral character. Nevertheless, his paintings and artistic style was always in demand, and in addition to paintings he created theater costumes and sets, tapestries, and decorations for court celebrations. His work was prominent that it was reproduced in engravings and on porcelain and biscuit-ware. By the time of his death, Francois Boucher’s name and body of work had become synonymous with the Rococo style.

Boucher is also famous for his saying: "La nature est trop verte et mal éclairée" (The nature is too green and badly lit).

François Boucher (French: [fʁɑ̃swa buʃe]; 29 September 1703 – 30 May 1770) was a French painter, draughtsman and etcher, who worked in the Rococo style. Boucher is known for his idyllic and voluptuous paintings on classical themes, decorative allegories, and pastoral scenes. He was perhaps the most celebrated painter and decorative artist of the 18th century. He also painted several portraits of his patroness, Madame de Pompadour.

A native of Paris, Boucher was the son of a lesser known painter Nicolas Boucher, who gave him his first artistic training. At the age of seventeen, a painting by Boucher was admired by the painter François Lemoyne. Lemoyne later appointed Boucher as his apprentice, but after only three months, he went to work for the engraver Jean-François Cars.

In 1720, he won the elite Grand Prix de Rome for painting, but did not take up the consequential opportunity to study in Italy until five years later, due to financial problems at the Académie royale de peinture et de sculpture. On his return from studying in Italy he was admitted to the refounded Académie de peinture et de sculpture on 24 November 1731. His morceau de réception (reception piece) was his Rinaldo and Armida of 1734.

Boucher married Marie-Jeanne Buzeau in 1733. The couple had three children together. Boucher became a faculty member in 1734 and his career accelerated from this point as he was promoted Professor then Rector of the Academy, becoming inspector at the Royal Gobelins Manufactory and finally Premier Peintre du Roi (First Painter of the King) in 1765.

Boucher died on 30 May 1770 in his native Paris. His name, along with that of his patron Madame de Pompadour, had become synonymous with the French Rococo style, leading the Goncourt brothers to write: "Boucher is one of those men who represent the taste of a century, who express, personify and embody it."

Boucher is famous for saying that nature is "trop verte et mal éclairée" (too green and badly lit).

Boucher was associated with the gemstone engraver Jacques Guay, whom he taught to draw. Later Boucher made a series of drawings of works by Guay which Madame de Pompadour then engraved and distributed as a handsomely bound volume to favored courtiers. The neoclassical painter Jacques-Louis David began his painting instruction under Boucher.

Boucher took inspiration from artists such as Peter Paul Rubens and Antoine Watteau. Boucher's early works celebrate the idyllic and tranquil portrayal of nature and landscape with great elan. However, his art typically forgoes traditional rural innocence to portray scenes with a definitive style of eroticism as his mythological scenes are passionate and intimately amorous rather than traditionally epic. Marquise de Pompadour (mistress of King Louis XV), whose name became synonymous with Rococo art, was a great admirer of his work. Marquise de Pompadour is often referred to as the "godmother of Rococo."

Boucher's paintings such as The Breakfast (1739), a familial scene, show how he was as a master of the genre scene, where he regularly used his own wife and children as models. These intimate family scenes are contrasting to the licentious style seen in his Odalisque portraits.