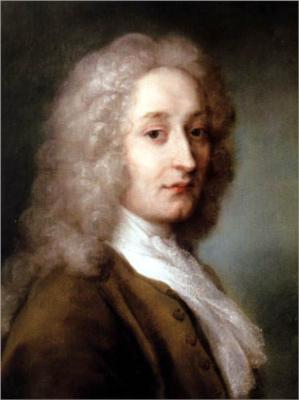 Watteau in the last year of his life - Rosalba Carriera

Jean-Antoine Watteau (French: [ʒɑ̃ ɑ̃twan vato]; baptised October 10, 1684 – died July 18, 1721), better known as Antoine Watteau, was a French painter whose brief career spurred the revival of interest in colour and movement, as seen in the tradition of Correggio and Rubens. He revitalized the waning Baroque style, shifting it to the less severe, more naturalistic, less formally classical, Rococo. Watteau is credited with inventing the genre of fêtes galantes, scenes of bucolic and idyllic charm, suffused with a theatrical air. Some of his best known subjects were drawn from the world of Italian comedy and ballet.

Watteau was born in October 1684 in the town of Valenciennes which had recently passed from the Spanish Netherlands to France. His father, Jean-Philippe Watteau, was a roofer given to brawling. Showing an early interest in painting, Jean-Antoine may have been apprenticed to Jacques-Albert Gérin, a local painter. Jean-Antoine's first artistic subjects were charlatans selling quack remedies on the streets of Valenciennes. Watteau left for Paris in 1702. There he found employment in a workshop at Pont Notre-Dame, making copies of popular genre paintings in the Flemish and Dutch tradition; it was in that period that he developed his characteristic sketchlike technique.

By 1705 he was employed as an assistant by the painter Claude Gillot, whose work represented a reaction against the turgid official art of Louis XIV's reign. In Gillot's studio Watteau became acquainted with the characters of the commedia dell'arte (its actors had been expelled from France in 1697), a favorite subject of Gillot's that would become one of Watteau's lifelong passions.

Afterward he moved to the workshop of Claude Audran III, an interior decorator, under whose influence he began to make drawings admired for their consummate elegance. Audran was the curator of the Palais du Luxembourg, where Watteau was able to see the magnificent series of canvases painted by Peter Paul Rubens for Queen Marie de Medici. The Flemish painter would become one of his major influences, together with the Venetian masters he would later study in the collection of his patron and friend, the banker Pierre Crozat.

In 1709 Watteau tried to obtain the Prix de Rome and was rejected by the Academy. In 1712 he tried again and was considered so good that, rather than receiving the one-year stay in Rome for which he had applied, he was accepted as a full member of the Academy. He took five years to deliver the required "reception piece", but it was one of his masterpieces: the Pilgrimage to Cythera, also called the Embarkation for Cythera.

Watteau lacked aristocratic patrons; his buyers were bourgeois such as bankers and dealers. Among his most famous paintings, beside the two versions of the Pilgrimage to Cythera, one in the Louvre, the other in the Schloss Charlottenburg, Berlin, are Pierrot (long identified as "Gilles"), Fêtes venitiennes, Love in the Italian Theater, Love in the French Theater, "Voulez-vous triompher des belles?" and Mezzetin. The subject of his hallmark painting, Pierrot (Gilles), is an actor in a white satin costume who stands isolated from his four companions, staring ahead with an enigmatic expression on his face.