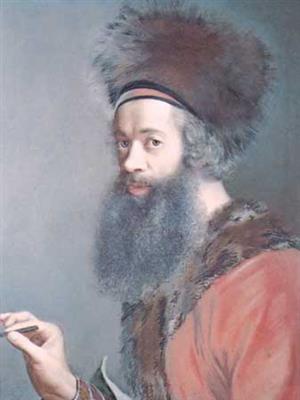 Jean-Étienne Liotard (French pronunciation: ​[ʒan‿etjɛn ljɔtaʁ]; 22 December 1702 – 12 June 1789) was a Swiss painter, art connoisseur and dealer. He is best known for his portraits in pastel, and for the works from his stay in Turkey. A Huguenot of French origin and citizen of the Republic of Geneva, he was born and died in Geneva, but spent most of his career in stays in the capitals of Europe, where his portraits were much in demand. He worked in Rome, Istanbul, Paris, Vienna, London and other cities.


Liotard was born in Geneva. His father was a French Protestant jeweller who fled to Geneva after 1685. Jean-Étienne Liotard began his studies under Professors Daniel Gardelle and Petitot, whose enamels and miniatures he copied with considerable skill.


He went to Paris in 1725, studying under Jean-Baptiste Massé [fr] and François Lemoyne, on whose recommendation he was taken to Naples by the vicomte de Puysieux, Louis Philogène Brulart, Marquis de Puysieulx and Comte de Sillery. In 1735 he was in Rome, painting the portraits of Pope Clement XII and several cardinals. In 1738 he accompanied Lord Duncannon to Constantinople, where he worked for the next four years.


Jean-Étienne Liotard visited Istanbul and painted numerous pastels of Turkish domestic scenes; he also continued to wear Turkish dress for much of the time when back in Europe. Using modern dress was considered unheroic and inelegant in history painting using Middle Eastern settings, with Europeans wearing local costume, as travellers were advised to do.


Many travellers had themselves painted in exotic Eastern dress on their return, including Lord Byron, as did many who had never left Europe, including Madame de Pompadour. Byron's poetry was highly influential in introducing Europe to the heady cocktail of Romanticism in exotic Oriental settings which was later to dominate 19th century Oriental art.


His eccentric adoption of oriental costume secured him the nickname of the Turkish painter.


He went to Vienna in 1742 to paint the portraits of the Imperial family. In 1745 he sold La belle chocolatière to Francesco Algarotti.


Still under distinguished patronage he returned to Paris. In 1753 he visited England, where he painted Princess Augusta of Saxe-Gotha, the Princess of Wales. He went to Holland in 1756, where, in the following year, he married Marie Fargues. She also came from a Hugenot family, and wanted him to shave off his beard.


In 1762 he painted portraits in Vienna, including Marie Antoinette; in 1770 in Paris. Another visit to England followed in 1772, and in the next two years his name figures among the Royal Academy exhibitors. He returned to his native town in 1776. In 1781 Liotard published his Traité des principes et des règles de la peinture. In his last days he painted still lifes and landscapes. He died at Geneva in 1789.


Liotard was an artist of great versatility. Best known for his graceful and delicate pastel drawings, of which La Liseuse, The Chocolate Girl, and La Belle Lyonnaise at the Dresden Gallery and Maria Frederike van Reede-Athlone at Seven at the J. Paul Getty Museum are delightful examples, he also achieved distinction for his enamels, copperplate engravings, and glass painting. Additionally, he wrote a Treatise on the Art of Painting and was an expert collector of paintings by the old masters.