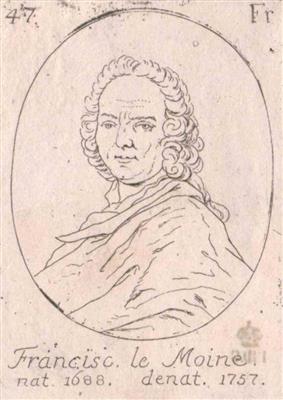 François Lemoyne or François Le Moine (French: [fʁɑ̃swa ləmwan]; 1688 – 4 June 1737) was a French rococo painter. He was a winner of the Prix de Rome, professor of the Académie de peinture et de sculpture, and Premier peintre du Roi to Louis XV. He was tutor to Charles-Joseph Natoire and François Boucher.


Throughout his career, Lemoyne sought to be seen as the heir to Charles Le Brun and the leading painter of his generation, titles also vied for by his rival Jean-François de Troy (1679–1752). Lemoyne's work and talent, notably plied in Versailles, earned him the esteem of his contemporaries and the name of the "new Le Brun". He collaborated with or worked alongside other artists of the era, including Nonotte, Gilles Dutilleul, Charles de La Fosse, and Coypel. He took his own life in 1737, at the height of his career. With his death, the fashion of large allegorical ceilings disappeared.


Lemoyne was born in Paris in 1688 and studied under Louis Galloche until 1713. In 1711, Lemoyne won the Prix de Rome and travelled to Italy to continue his studies. After his return to Paris, Lemoyne was accepted as a full member of the Académie de peinture et de sculpture in 1718 and later elected as a professor in 1733. In 1723, Lemoyne returned to Italy for a second trip.


In 1727, the duc d'Antin (Louis-Antoine de Pardaillan de Grondin), serving as the director of the Bâtiments du Roi, held an art competition in the hopes of reviving history painting among members of the Académie. Only one Salon had been held since 1704 (in 1725), so this offered a rare opportunity for public exhibition of paintings. Twelve paintings were submitted in all, by artists including Charles-Antoine Coypel and Noel-Nicholas Coypel. Opinion was widely divided, with critical opinion favoring the paintings by the two Coypels, but in the end the first place prize of 5,000 livres was jointly awarded to Lemoyne and de Troy, a compromise which frustrated them both.


In 1728, Lemoyne was awarded a royal commission to paint the ceiling of the Salon d’Hercule at Versailles, which he worked on from 1733–36. He had seen similar paintings in Italy (such as Pietro da Cortona’s in the Palazzo Barberini), and sought to prove that the French could excel at à ciel ouvert as much as the Italians. When the work was complete, he received "unanimous praise," including accolades from Voltaire and Cardinal Fleury. His career was at its peak in 1736, when he was appointed Premier peintre du Roi.


The following year, 1737, Lemoyne committed suicide in Paris. The reasons for this are not known, though excess of work, court intrigue at Versailles, the death of his wife, temperamental instability, and frustration at his inability to attain artistic perfection have been submitted. He chose death by sword, stabbing himself a total of nine times in the chest and throat. This was six months after finishing the ceiling painting "L'apothéose d'Hercule" in the Salon d'Hercule in the grand appartement du roi, and the day after completing the painting Time Saving Truth from Falsehood and Envy for his friend and patron François Berger.