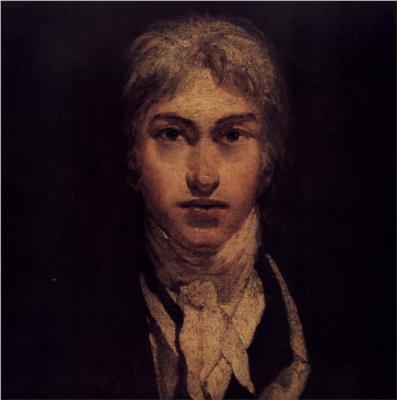 Joseph Mallord William Turner RA (23 April 1775 – 19 December 1851), known as J. M. W. Turner and contemporarily as William Turner, was an English Romantic painter, printmaker and watercolourist, known for his expressive colourisation, imaginative landscapes and turbulent, often violent marine paintings. Turner was born in Maiden Lane, Covent Garden, London, to a modest lower middle-class family. He lived in London all his life, retaining his Cockney accent and assiduously avoiding the trappings of success and fame. A child prodigy, Turner studied at the Royal Academy of Arts from 1789, enrolling when he was 14, and exhibited his first work there at 21. During this period, he also served as an architectural draftsman. He earned a steady income from commissions and sales, which due to his troubled, contrary nature, were often begrudgingly accepted. He opened his own gallery in 1804 and became professor of perspective at the Academy in 1807, where he lectured until 1828, although he was viewed as profoundly inarticulate. He traveled to Europe from 1802, typically returning with voluminous sketchbooks.

Intensely private, eccentric and reclusive, Turner was a controversial figure throughout his career. He did not marry, but fathered two daughters, Eveline (1801–1874) and Georgiana (1811–1843), by his housekeeper Sarah Danby. He became more pessimistic and morose as he got older, especially after the death of his father, after which his outlook deteriorated, and his gallery fell into disrepair and neglect, and his art intensified. He lived in near poverty circumstances and in poor health from 1845, and died in London in 1851 aged seventy-six. Turner is buried in Saint Paul's Cathedral, London.

He left behind over 2,000 paintings and 19,000 drawings and sketches. He had been championed by the leading English art critic John Ruskin from 1840, and is today regarded as having elevated landscape painting to an eminence rivaling history painting.

Joseph Mallord William Turner was born on 23 April 1775 and baptised on 14 May. He was born in Maiden Lane, Covent Garden, in London, England. His father, William Turner (1745–21 September 1829), was a barber and wig maker. His mother, Mary Marshall, came from a family of butchers. A younger sister, Mary Ann, was born in September 1778 but died in August 1783.

His mother showed signs of mental disturbance from 1785 and was admitted to St Luke's Hospital for Lunatics in Old Street in 1799 and was moved in 1800 to Bethlem Hospital where she died in 1804. Turner was sent to his maternal uncle, Joseph Mallord William Marshall, in Brentford, then a small town on the banks of the River Thames west of London. The earliest known artistic exercise by Turner is from this period—a series of simple colourings of engraved plates from Henry Boswell's Picturesque View of the Antiquities of England and Wales.

Around 1786, Turner was sent to Margate on the north-east Kent coast. There he produced a series of drawings of the town and surrounding area that foreshadowed his later work. By this time, Turner's drawings were being exhibited in his father's shop window and sold for a few shillings. His father boasted to the artist Thomas Stothard that: "My son, sir, is going to be a painter". In 1789, Turner again stayed with his uncle who had retired to Sunningwell in Berkshire (now part of Oxfordshire). A whole sketchbook of work from this time in Berkshire survives as well as a watercolour of Oxford. The use of pencil sketches on location, as the foundation for later finished paintings, formed the basis of Turner's essential working style for his whole career.