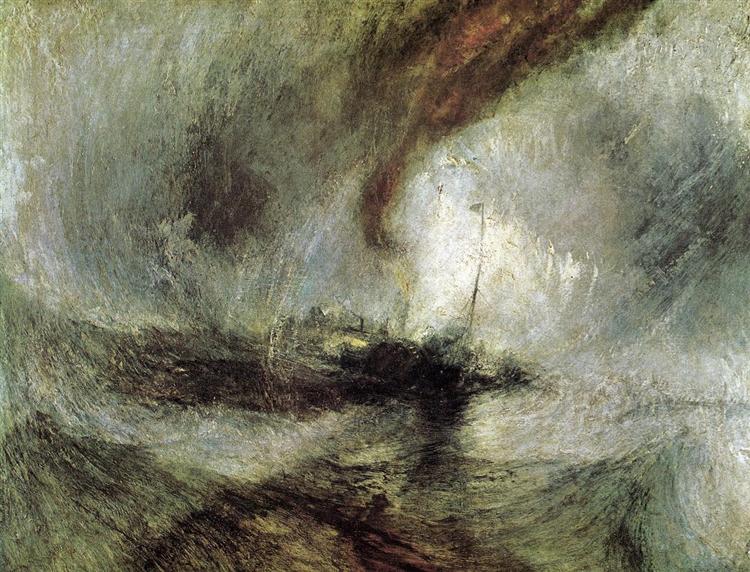 The picture may recall a particularly bad storm in January 1842 though it has not been possible to tie down the exact incident. Despite Turner's title, no ship called Ariel is known to have been lost or involved in a storm in the years immediately preceding 1842, nor is any ship of that name known to have operated out of Harwich at this time. However, Charles Ninnis has suggested that Turner misremembered the name of the Fairy, which did set out from Harwich on 12 November 1840 and sank with all hands in a storm which began the following day and was still raging on 21 November, ‘the day on which the Princess Royal was born’, as the label on the back of No. 480 has it. Turner is not known to have been at Harwich at the time but could well have witnessed the storm at Margate where he often stayed with Mrs Booth.

In addition Adele Holcomb has cast doubts on the veracity of the story that Turner had himself tied to the mast for four hours during the storm; it does indeed bear a suspicious resemblance to accounts of the marine painter Joseph Vernet. However, in the fifth edition of his notes on the Turners on view at Marlborough House, Ruskin added a report of a conversation between the Rev. William Kingsley and Turner in which the artist stressed the truth of the incident and his interest in recording the experience: ‘I had taken my mother and a cousin to see Turner's pictures, and, as my mother knows nothing about art, I was taking her down the gallery to look at the large “Richmond Park”, but as we were passing the “Snowstorm” she stopped before it, and I could hardly get her to look at any other picture; she told me a great deal more about it than I had any notion of, though I have seen many sea storms. She had been in such a scene on the coast of Holland during the war. When, some time afterwards, I thanked Turner for his permission for her to see his pictures, I told him that he would not guess what had caught my mother's fancy, and then named the picture; and he then said, “I did not paint it to be understood, but I wished to show what such a scene was like; I got the sailors to lash me to the mast to observe it; I was lashed for four hours, and I did not expect to escape, but I felt bound to record it if I did. But no one had any business to like the picture.” “But,” said I, “my mother once went through just such a scene, and it brought it all back to her.” “Is your mother a painter?” “No.” “Then she ought to have been thinking of something else.” These were nearly his words; I observed at the time he used “record” and “painting” as the title “author” had struck me before’—see Turner's sub-title in the R.A. catalogue; Ruskin himself wrote ‘Note the significant use of this word, instead of “artist”’.

However, Ruskin records Turner's hurt reaction to the criticism (untraced) that the picture was nothing but a mass of ‘soapsuds and whitewash’: ‘Turner was passing the evening at my father's house on the day this criticism came out: and after dinner, sitting in his arm-chair by the fire, I heard him muttering to himself at intervals, “soapsuds and whitewash! What would they have? I wonder what they think the sea's like? I wish they'd been in it.”’ (Incidentally Frith, giving evidence at the Whistler versus Ruskin trial in 1878, attributed this criticism to Ruskin himself! See Ruskin, 1903–12, xxix, p. 584.) The Athenaeum's review on 14 May was typical of this abuse: ‘This gentleman has, on former occasions, chosen to paint with cream, or chocolate, yolk of egg, or currant jelly, —here he uses his whole array of kitchen stuff. Where the steam-boat is—where the harbour begins, or where it ends—which are the signals, and which the author in the Ariel...are matters past our finding out.’ Or, as the Art Union for 1 June observed, ‘Through the driving snow there are just perceptible portions of a steam-boat labouring on a rolling sea; but before any further account of the vessel can be given, it will be necessary to wait until the storm is cleared off a little. The sooner the better.’

In Modern Painters Ruskin described the Snowstorm, with two watercolours, as ‘nothing more than passages of the most hopeless, desolate, uncontrasted greys, and yet ... three of the very finest pieces of colour that have come from his hand’. Later, in a description of the effect of sea after prolonged storm he pointed out that ‘There is indeed no distinction left between air and sea; that no object, nor horizon, nor any land-mark or natural evidence of position is left ... Suppose the effect of the first sunbeam sent from above to show this annihilation to itself, and you have the sea picture of the Academy, 1842, the Snowstorm, one of the very grandest statements of sea-motion, mist, and light, that has ever been put on canvas, even by Turner. Of course it was not understood; his finest works never are...’ (Martin Butlin and Evelyn Joll, The Paintings of J.M.W. Turner, revised ed., New Haven and London 1984)

Though panned by many contemporary critics, critic John Ruskin commented in 1843 that it was "one of the very grandest statements of sea-motion, mist and light, that has ever been put on canvas".

An inscription on the painting relates that The Author was in this Storm on the Night the "Ariel" left Harwich. Turner later recounted a story about the background of the painting:

He was 67 years old at the time. Some later commentators doubt the literal truth of this account. Other critics accept Turner's account, and one wrote, "He empathized completely with the dynamic form of sovereign nature." This inscription allows us to better understand the scene represented and the confusion of elements.

Turner had investigated the interactions between nature and the new technology of steamboats in at least five paintings in the previous decade. Throughout his career, Turner engaged with issues of urbanism, industry, railroads and steam power. The paddle steamer "Ariel" was formerly called the "Arrow", being built in 1821–1822. In 1837 she was acquired by the Admiralty and renamed "Ariel", and was used as the Dover packet up to 1846.

Early critical response to the painting was largely negative, with one critic calling it "soapsuds and whitewash". John Ruskin, the leading English art critic of the Victorian era, though, wrote in 1843 in his book Modern Painters that the painting was "one of the very grandest statements of sea-motion, mist and light, that has ever been put on canvas." Reportedly Turner was hurt by the criticism, repeating "soapsuds and whitewash" over and over again, and saying, "What would they have? I wonder what they think the sea's like? I wish they'd been in it". Ruskin commented, "It is thus, too often, that ignorance sits in judgment on the works of genius". More recently, art historian Alexandra Wettlaufer wrote that the painting is one of Turner's "most famous, and most obscure, sublime depictions".

Currently in the collection of the Tate in London, it will be on exhibition at the De Young Museum in San Francisco in 2015.

The painting depicts a paddle steamer caught in a snow storm. This marine painting is showing a Romantic era's painter's depiction of a snowstorm on water at its best, fully developing the bold, daring Romantic fantasy of Turner. Turner was unrivaled in depicting the natural world unmastered by mankind and exploring the effects of the elements and the battle of the forces of the nature. Turner worked first as a watercolorist, and he started to work much later with oils. He later applied the techniques he learned in watercolour onto oil paintings.

It is typical of the late style of Turner. Turner's tints and shades of colours are painted in different layers of colour, the brushstrokes adding texture to the painting. The colours are monochromatic, only a few shades of grey, green and brown are present, having the same tone of colours. The silvery pale light that surrounds the boat creates a focal point, drawing the viewer into the painting. The smoke from the steamboat spreads out over the sky, creating abstract shapes of the same quality like the waves.