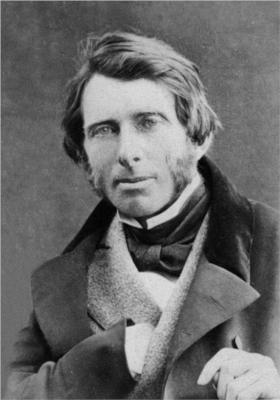 John Ruskin (8 February 1819 – 20 January 1900) was the leading English art critic of the Victorian era, as well as an art patron, draughtsman, watercolourist, a prominent social thinker and philanthropist. He wrote on subjects as varied as geology, architecture, myth, ornithology, literature, education, botany and political economy.

His writing styles and literary forms were equally varied. He penned essays and treatises, poetry and lectures, travel guides and manuals, letters and even a fairy tale. He also made detailed sketches and paintings of rocks, plants, birds, landscapes, and architectural structures and ornamentation.

The elaborate style that characterised his earliest writing on art gave way in time to plainer language designed to communicate his ideas more effectively. In all of his writing, he emphasised the connections between nature, art and society.

He was hugely influential in the latter half of the 19th century and up to the First World War. After a period of relative decline, his reputation has steadily improved since the 1960s with the publication of numerous academic studies of his work. Today, his ideas and concerns are widely recognised as having anticipated interest in environmentalism, sustainability and craft.

Ruskin first came to widespread attention with the first volume of Modern Painters (1843), an extended essay in defence of the work of J. M. W. Turner in which he argued that the principal role of the artist is "truth to nature". From the 1850s he championed the Pre-Raphaelites who were influenced by his ideas. His work increasingly focused on social and political issues. Unto This Last (1860, 1862) marked the shift in emphasis. In 1869, Ruskin became the first Slade Professor of Fine Art at the University of Oxford, where he established the Ruskin School of Drawing. In 1871, he began his monthly "letters to the workmen and labourers of Great Britain", published under the title Fors Clavigera (1871–1884). In the course of this complex and deeply personal work, he developed the principles underlying his ideal society. As a result, he founded the Guild of St George, an organisation that endures today.

Ruskin was the only child of first cousins. His father, John James Ruskin, (1785–1864), was a sherry and wine importer, founding partner and de facto business manager of Ruskin, Telford and Domecq (see Allied Domecq). John James was born and brought up in Edinburgh, Scotland, to a mother from Glenluce and a father originally from Hertfordshire. His wife, Margaret Cox, née Cock (1781–1871), was the daughter of an aunt on the English side of the family and a publican in Croydon. She had joined the Ruskin household when she became companion to John James's mother, Catherine.

John James had hoped to practice law, and was articled as a clerk in London. His father, John Thomas Ruskin, described as a grocer (but apparently an ambitious wholesale merchant), was an incompetent businessman. To save the family from bankruptcy, John James, whose prudence and success were in stark contrast to his father, took on all debts, settling the last of them in 1832. John James and Margaret were engaged in 1809, but opposition to the union from John Thomas, and the issuance of the debt, delayed their wedding which was finally conducted without celebration in 1818. John James died on 3 March 1864 and is buried in the churchyard of St John the Evangelist, Shirley, Croydon.