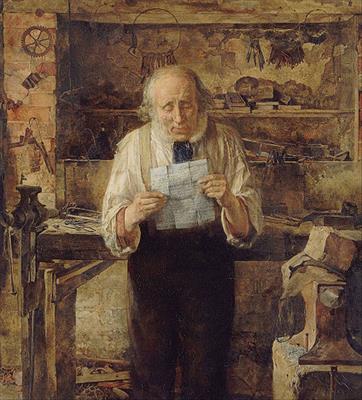 News from My Lad - James Campbell

James Campbell was the son of a Liverpool insurance clerk. He studied at the Liverpool Academy and at the Royal Academy in London.

For several years between1856 - 62, Campbell was influenced by the Pre-Raphaelite Brotherhood and their followers. He was most interested in their painting techniques and less concerned with the moral subjects they typcially favoured.

James Campbell (Liverpool, 1828– Birkenhead, 1893) was an English artist, part of a group from Liverpool, who were influenced by the Pre-Raphaelite style. He studied briefly at the Liverpool Academy and then moved on to the Royal Academy Schools in 1851.

His pictures focused on the details of lower-middle class and working class life in his native Liverpool, with works such as Waiting for Legal Advice (1857) which drew on his first hand experience as son of an insurance clerk. The Walker Art Gallery describes him as "the most Dickensian of all the Pre-Raphaelites."