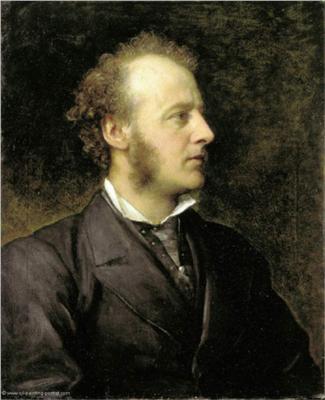 Sir John Everett Millais, 1st Baronet, PRA (/ˈmɪleɪ/; 8 June 1829 – 13 August 1896) was an English painter and illustrator who was one of the founders of the Pre-Raphaelite Brotherhood.

A child prodigy, at the age of eleven Millais became the youngest student to enter the Royal Academy Schools. The Pre-Raphaelite Brotherhood was founded at his family home in London, at 83 Gower Street (now number 7). Millais became the most famous exponent of the style, his painting Christ in the House of His Parents (1850) generating considerable controversy, and painting perhaps the embodiment of the school, Ophelia, in 1851. However, by the mid-1850s Millais was moving away from the Pre-Raphaelite style and developing a new and powerful form of realism in his art. His later works were enormously successful, making Millais one of the wealthiest artists of his day, but some former admirers including William Morris saw this as a sell-out (Millais notoriously allowed one of his paintings to be used for a sentimental soap advert). While these and early 20th-century critics, reading art through the lens of Modernism, viewed much of his later production as wanting, this perspective has changed in recent decades, as his later works have come to be seen in the context of wider changes and advanced tendencies in the broader late nineteenth-century art world.

Millais's personal life has also played a significant role in his reputation. His wife Effie was formerly married to the critic John Ruskin, who had supported Millais's early work. The annulment of the marriage and her wedding to Millais have sometimes been linked to his change of style, but she became a powerful promoter of his work and they worked in concert to secure commissions and expand their social and intellectual circles.

Millais was born in Southampton, England in 1829, of a prominent Jersey-based family. His parents were John William Millais and Emily Mary Millais. Most of his early childhood was spent in Jersey, to which he retained a strong devotion throughout his life. The author Thackeray once asked him "when England conquered Jersey." Millais replied "Never! Jersey conquered England." The family moved to Dinan in Brittany for a few years in his childhood.

His mother's "forceful personality" was the most powerful influence on his early life. She had a keen interest in art and music, and encouraged her son's artistic bent, promoting the relocating of the family to London to help develop contacts at the Royal Academy of Art. He later said "I owe everything to my mother."

His prodigious artistic talent won him a place at the Royal Academy schools at the unprecedented age of eleven. While there, he met William Holman Hunt and Dante Gabriel Rossetti with whom he formed the Pre-Raphaelite Brotherhood (known as the "PRB") in September 1848 in his family home on Gower Street, off Bedford Square.

Millais's Christ in the House of His Parents (1849–50) was highly controversial because of its realistic portrayal of a working class Holy Family labouring in a messy carpentry workshop. Later works were also controversial, though less so. Millais achieved popular success with A Huguenot (1851–52), which depicts a young couple about to be separated because of religious conflicts. He repeated this theme in many later works. All these early works were painted with great attention to detail, often concentrating on the beauty and complexity of the natural world. In paintings such as Ophelia (1851–52) Millais created dense and elaborate pictorial surfaces based on the integration of naturalistic elements. This approach has been described as a kind of "pictorial eco-system." Mariana is a painting that Millais painted in 1850-51 based on the play Measure for Measure by William Shakespeare and the poem of the same name by Alfred, Lord Tennyson from 1830. In the play, the young Mariana was to be married, but was rejected by her betrothed when her dowry was lost in a shipwreck.