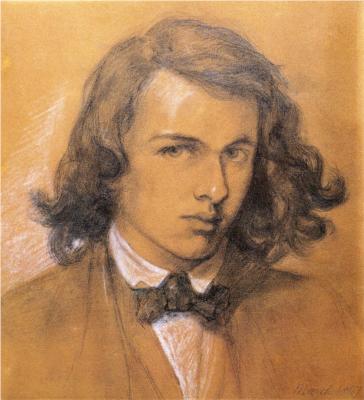 Dante Gabriel Rossetti was a painter, poet, illustrator, and one of the founders of the Pre-Raphaelite Brotherhood. Rossetti was born in London in 1828. His father, an Italian political refugee, was a poet, Dante scholar and Professor of Italian at King’s College, London. Rossetti’s family upbringing likely had a profound effect on the artist and his siblings, as they all became poets, artists, and critics. Rossetti was drawn to both poetry and painting, and the synthesis of the two will become an integral part of his art. He began his artistic training in 1841 by entering the Sass’s Drawing Academy. He studied at the Royal Academy of Arts between 1845 and 1848, before briefly becoming a pupil of Ford Madox Brown.

In August 1848, Rossetti moved to a studio with William Hollman Hunt, and shortly after, the two founded the Pre-Raphaelite Brotherhood together with John Everett Millais. The name of the group came from the opposition to the Royal Academy’s promotion of the Renaissance master Raphael. The goal of the Pre-Raphaelites was truth to nature, which would be achieved by painting from nature outdoors and embracing complex compositions with abundant details and elaborate symbolism. Initially, they focused on religious subjects, but later, they also drew inspiration from literature and poetry, particularly from works that dealt with themes of love and death.

Rossetti’s first significant oil paintings, The Girlhood of Mary Virgin (1848-1849) and Ecce Ancilla Domini! (The Annunciation) (1849-1850) dealt with religious subjects. Both paintings featured a simplistic style and rich use of symbolism. When Rossetti exhibited Ecce Ancilla Domini! at the National Institution in 1850, his unconventional depiction of the Annunciation received harsh criticisms. After the negative reception of Ecce Ancilla Domini! Rossetti would rarely present his paintings in public. He also turned away from religious themes, choosing scenes from the literary works of William Shakespeare, Robert Browning, and Dante instead.

In 1849, Rossetti met Elizabeth Siddall, one of his muses and models, whom he married in 1860. In the mid-1850s, Rossetti established essential connections with the critic John Ruskin, who was instrumental in promoting the Pre-Raphaelites.

In 1859, Rossetti painted Bocca Baciata (1859), which would represent a turning point in the artist’s career. It was the first of the highly stylized pictures of single female figures, which became the signature of his art. Rossetti painted these figures almost obsessively, and he often created multiple replicas of the same work. The artist had several muses that frequented his paintings: Fanny Cornforth, Jane Morris, and Alexa Wilding. Many of his works, such as Proserpine (1874) and Lady Lilith (1866-1868) (altered 1872-1873), were accompanied by sonnets that added a narrative quality to the portraits.

In 1862, Siddal died of a laudanum overdose, and in the act of grief, the artist buried her with his collection of sonnets. Rossetti dedicated Beata Beatrix (ca. 1864-1870) to Siddall. In this painting, he created a parallel between Dante’s sorrow at the death of Beatrice and his own tragedy by casting Siddal in the role of Beatrice. He did, however, order to have his wife’s body exhumed in 1869 to retrieve his Poems that were published in 1870. In 1872, Rossetti suffered from a physical and mental collapse, and although he recovered and continued to paint, he became recluse and distant from most friends. Over the years, Rossetti’s health continued to deteriorate until his death in 1882 from kidney disease.

Gabriel Charles Dante Rossetti (12 May 1828 – 9 April 1882), generally known as Dante Gabriel Rossetti (/ˈdænti ˈɡeɪbriəl rəˈzɛti/), was a British poet, illustrator, painter and translator. He founded the Pre-Raphaelite Brotherhood in 1848 with William Holman Hunt and John Everett Millais. Rossetti was later to be the main inspiration for a second generation of artists and writers influenced by the movement, most notably William Morris and Edward Burne-Jones. His work also influenced the European Symbolists and was a major precursor of the Aesthetic movement.

Rossetti's art was characterised by its sensuality and its medieval revivalism. His early poetry was influenced by John Keats. His later poetry was characterised by the complex interlinking of thought and feeling, especially in his sonnet sequence, The House of Life. Poetry and image are closely entwined in Rossetti's work. He frequently wrote sonnets to accompany his pictures, spanning from The Girlhood of Mary Virgin (1849) and Astarte Syriaca (1877), while also creating art to illustrate poems such as Goblin Market by the celebrated poet Christina Rossetti, his sister.

Rossetti's personal life was closely linked to his work, especially his relationships with his models and muses Elizabeth Siddal, Fanny Cornforth and Jane Morris.

The son of émigré Italian scholar Gabriele Pasquale Giuseppe Rossetti and his wife Frances Mary Lavinia Polidori, Gabriel Charles Dante Rossetti was born in London, England on 12 May 1828. His family and friends called him Gabriel, but in publications he put the name Dante first in honour of Dante Alighieri. He was the brother of poet Christina Rossetti, critic William Michael Rossetti, and author Maria Francesca Rossetti. His father was a Roman Catholic, at least prior to his marriage, and his mother was an Anglican; ostensibly Gabriel was baptized as and was a practicing Anglican. During his childhood, Rossetti was home and King's College School, and often read the Bible, along with the works of Shakespeare, Dickens, Sir Walter Scott, and Lord Byron.

The youthful Rossetti is described as "self-possessed, articulate, passionate and charismatic" but also "ardent, poetic and feckless". Like all his siblings, he aspired to be a poet and attended King's College School, in its original location near the Strand in London. He also wished to be a painter, having shown a great interest in Medieval Italian art. He studied at Henry Sass' Drawing Academy from 1841 to 1845, when he enrolled in the Antique School of the Royal Academy, which he left in 1848. After leaving the Royal Academy, Rossetti studied under Ford Madox Brown, with whom he retained a close relationship throughout his life.

Following the exhibition of William Holman Hunt's painting The Eve of St. Agnes, Rossetti sought out Hunt's friendship. The painting illustrated a poem by the little-known John Keats. Rossetti's own poem, "The Blessed Damozel", was an imitation of Keats, and he believed Hunt might share his artistic and literary ideals. Together they developed the philosophy of the Pre-Raphaelite Brotherhood which they founded along with John Everett Millais.

The group's intention was to reform English art by rejecting what they considered to be the mechanistic approach first adopted by the Mannerist artists who succeeded Raphael and Michelangelo and the formal training regime introduced by Sir Joshua Reynolds. Their approach was to return to the abundant detail, intense colours, and complex compositions of Quattrocento Italian and Flemish art. The eminent critic John Ruskin wrote: