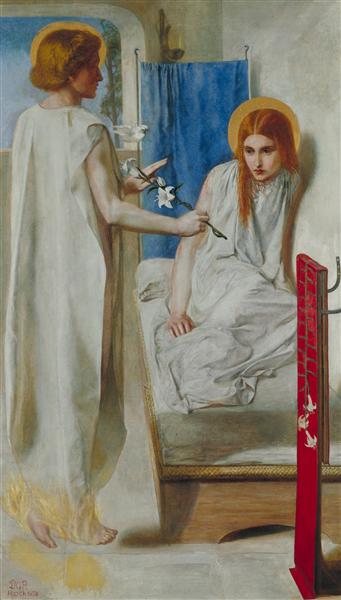 Ecce Ancilla Domini! (The Annunciation) (1849-1850) represents a radical interpretation of the religious subject. Inspired by Early Renaissance artists like Sandro Botticelli and Fra Angelico, Rossetti presented an unconventional depiction of the Annunciation. Traditionally, the Virgin is seen in a state of deep thought or prayer as the Angel Gabriel usually approaches on bended knee gesturing towards the heavens. In Ecce Ancilla Domini!, the Virgin is rising awkwardly from her bed, as if awakened from sleep, while the Angel presents her with a white lily.

The artist used several models for the painting, including his sister Christina and brother William Michael. The painting is sometimes linked to another work, The Girlhood of Mary Virgin (1848-1849). In the composition, the Virgin Mary is in the company of her parents and the young Angel Gabriel: she is embroidering with her mother while her father is trimming a vine. However, Mary pays little attention to her embroidering; instead, she is surrounded by symbolic objects that prepare her for her future role: the dove that symbolizes the holy spirit, the palm branch, thorns that represent Jesus Christ, and the book that signifies hope, faith, and charity. Ecce Ancilla Domini! continues the story, as Mary learns the purpose of her long preparations.

In Ecce Ancilla Domini!, the composition is dominated by white and blue, the two colors traditionally associated with the Virgin. Both figures wear white, a symbol of the Virgin’s purity, highlighting the bright blue tones in the background. However, unlike traditional pictures that display the figures in a lavish dress, the plain white clothes resemble undergarments. The figures are close in a cramped and narrow space, the Angel Gabriel is seen from the back, and his expression is hard to discern. Even though the Angel has no wings, his role as the messenger of God is emphasized through the presence of the dove, and the light flames under his feet, that give the appearance of levitation. He peculiarly holds the lily, and it seems that the flower is almost a reverse image of the lilies on the red patch of embroidery. Some scholars believe that the placement of the lily contains sexual overtones, as the tip of the flower appears to be pointing towards Mary’s womb. Rossetti probably wanted to subvert the symbolism of the lily: the flower that usually signifies purity can be interpreted as a symbol of Mary’s transition from sexual innocence to sexual awareness.

Rossetti intended to make a pendant, companion piece for the painting, showing the Virgin’s death, but this plan never materialized. If Ecce Ancilla Domini! was supposed to be a diptych, it partially explains the tall and narrow format of the painting (72.4 cm × 41.9 cm). The artwork was exhibited at the National Institution in 1850 and received mixed reviews. One particularly harsh critic wrote: “a work evidently thrust by the artist into the eye of the spectator more with the presumption of a teacher than in the modesty of a hopeful and true aspiration after excellence.” The painting was bought for by early Pre-Raphaelite patron Francis McCracken. The Tate Gallery purchased it in 1886.