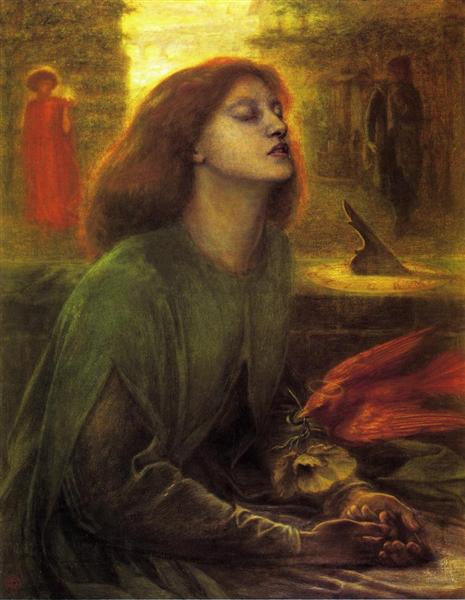 Beata Beatrix (ca. 1864-1870) depicts a scene from the poem La Vita Nouva (New Life) by Italian poet Dante Alighieri. Rossetti’s fascination with Dante began in the mid-1840s. A few years later, Rossetti translated La Vita Nouva, which appeared in 1864 as part of his publication The Early Italian Poets. Before painting Beata Beatrix, Rossetti already created numerous illustrations inspired by Dante’s poem, like The Meeting of Dante and Beatrice in Paradise (c.1854) and Dante`s Vision of Rachel and Leah (c.1855).

In Beata Beatrix, the artist created a parallel between the Italian poet Dante’s sorrow at the death of his beloved Beatrice, and his own biography, the death of his wife Elizabeth Siddal in 1862. Siddal died of an overdose of laudanum, and her death was most likely a suicide. Rossetti painted Siddal as Beatrice: he depicted her not in the moment of death, but in a state that he described as a “sudden spiritual transfiguration.” The portrait of Beatrice has a mystical and transcendental quality: she is pale and ghostly, but also sensual and ethereal. The red dove acts like a messenger, bringing her a poppy flower, an instrument of death. Unlike the white dove, a symbol of purity, the red dove can be interpreted as a symbol of passion. The poppy holds several meanings: it is a symbol of passion, but also sleep and death. The flower is also a reference to Siddal’s overdose from laudanum, a drug that contains opium, which is made from the poppy flower.

The backdrop represents the city of Florence, the setting of Dante’s story, and the bridge refers to Ponte Vecchio, a landmark of the city. In one of his letters, Rossetti discussed the role of the city in the painting: “You will remember how much Dante dwells on the desolation of the city in connection with the incident of her death, and for his reason, I have introduced it, as my background, and made the figure of Dante and love passing through the street and gazing ominously on one another, conscious of the event”. The figure of Love is portrayed as an angel holding in her hand a flickering flame signifying Beatrice’s life. The frame designed by Rossetti also references the city of Florence. He includes the date of Beatrice’s death and a phrase from Lamentations 1:1 that Dante quotes in La Vita Nuova: ‘Quomodo sedet sola civitas’ which means ‘how lonely the city stands’, referring to the mourning of Beatrice throughout Florence.

Generally, Beata Beatrix is understood as a commemorative painting, the artist’s expression of grief, and a tribute to his late wife. Rossetti worked on the oil painting for several years after Siddal’s death, but he had created other renditions of the artwork before Siddal’s death. Throughout his career, Rossetti often created several versions or replicas of his paintings. Beata Beatrix was the first oil version of the image, and in 1889, it became a part of the Tate Britain collection. Although reluctant at first, Rossetti painted a second oil version for his patron William Graham, Beata Beatrix (c.1872), which is now part of the collection of the Art Institute of Chicago. For this version, Rossetti added a predella – a painted panel at the bottom of the frame, which depicts the reunion of Beatrice and Dante in paradise. The additional frame provides a happy ending to the medieval love story, and perhaps reflects Rossetti’s new outlook on his grief.

Beata Beatrix is an oil on canvas painting by Pre-Raphaelite artist Dante Gabriel Rossetti, completed in 1870. It depicts Beatrice Portinari from Dante Alighieri's poem La Vita Nuova at the moment of her death. The painting's title in English translates to 'Blessed Beatrice'. La Vita Nuova had been a story that Rossetti had found of interest from childhood and he had begun work translating it into English in 1845 and published it in his work, The Early Italian Poets.

Rossetti modeled Beatrice after his deceased wife and frequent model, Elizabeth Siddal, who died in 1862. The painting was created from the numerous drawings that Rossetti had made of Siddal during their time together. The symbolism in the painting of a red dove, a messenger of love, relates back to Rossetti's love for Siddal with the white poppy representing laudanum and the means of her death. Several of Siddal's friends found the painting to bear little resemblance to the drawings of her—the facial features were harder and the neck is out of proportion. Beata Beatrix is one of Rossetti's most recognized works and has made Siddal's name to be one that is frequently linked with Dante Alighieri's Beatrice.

In an 1873 letter to his friend William Morris, Rossetti said he intended the painting "not as a representation of the incident of the death of Beatrice, but as an ideal of the subject, symbolized by a trance or sudden spiritual transfiguration."

This painting is on display in the Tate Britain. It was a gift in memory of Francis, Baron Mount-Temple by his wife, Georgiana in 1889.

Rossetti was commissioned by William Graham to make a replica of Beata Beatrix. This oil replica, dated 1872, is almost the same size as the original but has a predella depicting Dante Alighieri and Beatrice meeting in paradise with a frame designed by Rossetti. It was given by bequest and on display at the Art Institute of Chicago.

Several other replica works were made by Rossetti of Beata Beatrix—a watercolor, a chalk drawing and another oil painting that was begun in 1877. This replica was still unfinished at the time of his death. His lifelong friend, Ford Madox Brown, completed it. In this painting, in contrast to the original, the bird flying towards Beatrice is a white dove holding red poppies in its beak. This painting is in Birmingham Museum and Art Gallery, England.