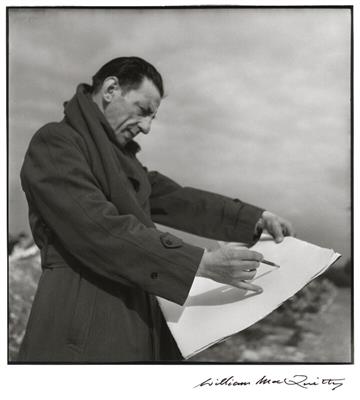 Paul Nash painted deeply romantic and lyrical landscapes subtly re-envisioned through the shards of modernism and the horrors of war. He was a prolific and hugely talented artist, a writer, a photographer, a fine book illustrator and designer of stage scenery, fabrics, and posters, as well as most famously, a painter. Although Nash embraced and encompassed many of the major 20th century art movements, including Surrealism and Abstract Art, his intense love for nature and surrounding landscape always remained the primary subject of his work. Indeed, even in his duties as official war artist - during both great wars - while documenting the broken debris of battlefields and feeling traumatized by the destruction that he saw, he still managed to make everything that he depicted appear somehow enchanted; gnarled and broken trees resemble ancient standing stones and sunlight or moonbeams usually peak through. As such Nash gives his viewers a magical gift: the insight that even from death springs rebirth, and furthermore, that the imagination always transforms, even the most horrific of scenes.

Throughout his career, Nash (quite accurately) saw himself as a successor to J.M.W. Turner and to William Blake. Like these inspirational figures before him, he attempted to capture the "spirit" of the English countryside, and according to curator Jemima Montagu, "was able to develop a unique form of expression which evolved out of, and yet has come to define, an idea of the English landscape". This skill was particularly marked in his work as a war artist, a role he was instrumental in shaping. Nash's paintings are strikingly honest about the devastating effects of war and particularly its impact on the landscape.

In the Tate retrospective that followed his death, Nash was celebrated for his war art, for his landscapes, and for his affiliation with Surrealism. It is the first two associations that Nash is perhaps best known, although it is important to remember that Nash also produced prints, engravings, lithographs, books, fabrics, rugs, glass, ceramics, and interiors. Tate's assistant curator Inga Fraser draws attention to the range of Nash' influences and output, stating "Nash's modernism was generous and inclusive" and goes on to cite a notebook in which the artist kept lists indicating the diverse references from which he drew. One such list reads "Cézanne, Cubism, artificial pattern, bricks, mosaics, stones, tiles, machinery, Léger, photography, hieroglyphics, block printing, cloth making, and film, natural forms... miscellaneous fireworks, sign, lighting... Woolworths."

Indeed, Nash's artistic career could be said to be full of surprising contrasts. As arts writer Marta Maretich points out, it is ironic that his most famous works, showing the horror and destruction of war, were funded by governmental organizations, the War Propaganda Bureau and the Ministry of Information, the very institutions that he struggled with ideologically as overall he did not agree with or understand war. It is perhaps for this reason that - although Nash rarely received a bad review of his work in his lifetime - Nash seems to have posed a challenge to critics. Even the highly sympathetic Chairman of the WAAC, Kenneth Clark expressed both admiration and confusion at Battle of Germany (1944) whilst the BBC correspondent, William Cook noted that "Nash's [interwar] art was saved from academic introspection by the outbreak of the Second World War". Similarly, the artist Geoff Hands contrasts Nash's "fairly conservative persona" with his interest in Surrealism, Cubism and abstraction, a comment that perhaps characterises why Nash's "official" war work is both somewhat subversive and intriguing. Ultimately we are confronted by the typical English artist paradox, that of living and working as a "subtle radical".

- In his deep attachment to the countryside, his persistent understated romance, and his interest in the perpetual cycle of time, there is something quintessentially English about the work of Paul Nash. He is connected to a lineage of the English Romantic poets, and to famous landscape painters, most notably to William Blake and J.M.W. Turner. He was also influenced by the artists Samuel Palmer and Dante Gabriel Rossetti, and like all of the above successfully placed English art on an international stage.

- Although he never joined any modernist movements, Nash worked with and had links to some of the most important British artists of the first half of the twentieth century. In the Summer of 1914, before enlisting as a soldier he worked with Roger Fry in the Omega Workshops. In 1933 he established the Unit One group with Ben Nicholson and Barbara Hepworth. Later in the 1930s, he became close with Eileen Agar and started to write about "seaside surrealism".

- Nash successfully exposed the "bitter truth" of war through a series of muddy trench pictures from WWI; he created invaluable documentary material of changes to the landscape experienced following trench warfare. During WWII Nash produced a series called "aerial creatures", showing German planes crashed in various landscapes. Throughout both wars, he was officially employed by the government but remained an ambiguous and highly political individual within the system. Nash once superimposed Hitler's head on one of his wrecked aircraft pictures and wanted these dropped as postcards all over the Third Reich.

- In later work, Nash was heavily influenced by Surrealism, and especially by the 1928 Giorgio de Chirico exhibition that he had seen in London. Unlike other Surrealists, he concentrated on mysterious aspects of landscapes rather than the placement of uncanny objects. He was very interested in the impact of man on nature. He explored this relationship in an incredible imaginative feat, through a series of late paintings called "aerial flowers" - thus a combination of complex human invention and the simple beauty of nature - a potential precursor to Salvador Dalí's iconic image of the Meditative Rose (1958).

Paul Nash (11 May 1889 – 11 July 1946) was a British surrealist painter and war artist, as well as a photographer, writer and designer of applied art. Nash was among the most important landscape artists of the first half of the twentieth century. He played a key role in the development of Modernism in English art.


Born in London, Nash grew up in Buckinghamshire where he developed a love of the landscape. He entered the Slade School of Art but was poor at figure drawing and concentrated on landscape painting. Nash found much inspiration in landscapes with elements of ancient history, such as burial mounds, Iron Age hill forts such as Wittenham Clumps and the standing stones at Avebury in Wiltshire. The artworks he produced during World War I are among the most iconic images of the conflict. After the war Nash continued to focus on landscape painting, originally in a formalized, decorative style but, throughout the 1930s, in an increasingly abstract and surreal manner. In his paintings he often placed everyday objects into a landscape to give them a new identity and symbolism.


During World War II, although sick with the asthmatic condition that would kill him, he produced two series of anthropomorphic depictions of aircraft, before producing a number of landscapes rich in symbolism with an intense mystical quality. These have perhaps become among the best known works from the period. Nash was also a fine book illustrator, and also designed stage scenery, fabrics and posters.


He was the older brother of the artist John Nash.


Nash was the son of a successful barrister, William Harry Nash, and his wife Caroline Maude, the daughter of a Captain in the Royal Navy. He was born in Kensington and grew up in Earl's Court in West London, but in 1902 the family moved to Iver Heath in Buckinghamshire. It was hoped the move to the countryside would help Caroline Nash, who was increasingly showing symptoms of mental illness. The growing cost of Caroline Nash's treatment led to the house at Iver Heath being rented out while Paul and his father lived together in lodgings and his younger sister and brother went to boarding schools. On Valentine's Day 1910, aged forty-nine, Caroline Nash died in a mental institution. Paul Nash was originally intended for a career in the navy, following the path of his maternal grandfather, but despite additional training at a specialist school in Greenwich, he failed the Naval Entrance Examination and returned to finish his schooling at St Paul's School. Encouraged by a fellow student at St Paul's, Eric Kennington, Nash considered the possibility of a career as an artist. After studying for a year at the South-Western Polytechnic in Chelsea, he then enrolled at the London County Council School of Photo-engraving and Lithography, in Bolt Court off Fleet Street, in the autumn of 1908. Nash spent two years studying at Bolt Court, where he began to write poetry and plays and where his work was spotted and praised by Selwyn Image. He was advised by his friend, the poet Gordon Bottomley, and by the artist William Rothenstein, that he should attend the Slade School of Art at University College, London. He enrolled in October 1910, though he later recorded that on his first meeting with the Professor of Drawing, Henry Tonks, 'It was evident he considered that neither the Slade, nor I, were likely to derive much benefit'.