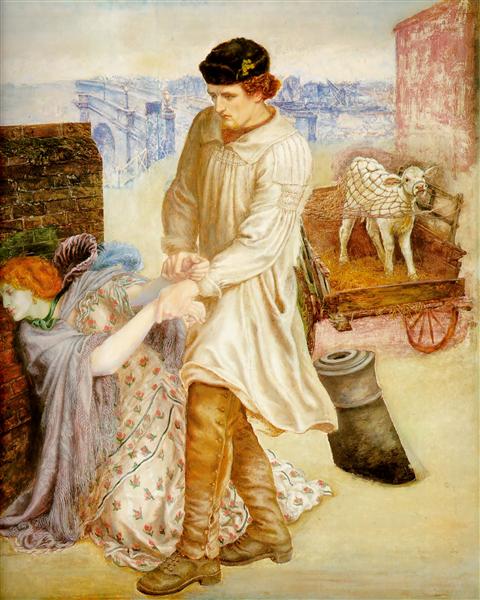 Found (1854-1855, 1859-1881) is a unique painting in the body of the work of Pre-Raphaelite artist Dante Gabriel Rossetti. It was the artist’s only attempt at a contemporary subject, urban prostitution. The subject of the ‘fallen woman,’ that described any woman partaking in sexual activity outside wedlock became increasingly popular in 19th-century art and literary circles. Like his contemporaries, Rossetti was also interested in the theme of the ‘fallen woman’: he painted The Gate of Memory (1864), a watercolor based on a scene from the poem Maryanne by William Bell Scott and wrote Jenny, a sympathetic poem about a prostituted woman.

The scene in Found shows a young countryman coming to London to bring a calf to sell at the market. He sees his former sweetheart, now a prostituted girl, and attempts to reach out and save her from her terrible fate. The male figure in Found is the woman’s rescuers, by ‘finding’ her, he offers the woman a chance at salvation. Rossetti identified his savior with the countryside; the man wears a rustic smock and boots that indicate he is an agricultural worker. In this way, he represents an innocent and idyllic past associated with the countryside before the woman was corrupted by sexuality and immorality found in the city.

Found closely relates to The Awakening Conscience (1853) by William Holman Hunt, who, like Rossetti, was one of the founders of the Pre-Raphaelite Brotherhood. Although the two paintings are different in structure and appearance, they offer opposite representations of the same theme. In Hunt’s painting, the situation is reversed: the male figure represents a predator, and the young woman’s awakening of conscience comes from singing a song about the idyllic past of the countryside. Both Rossetti and Hunt seek salvation in the notion of the countryside, an idyllic place that represents pre-sexual innocence and romance. However, by adding the calf to the composition, Rossetti gave Found another dimension and a sense of ambiguity. The calf is tethered to the cart, and it awaits its death once sold on the market. The man, the woman’s rescuer is also the calf’s caretaker, and the viewer is left to wonder about the woman’s faith. Would she indeed find salvation, or is she destined to end up like the calf sold on the market?

Rossetti considered Found one of his most important works, he worked on the painting up until he died in 1882, but it remained unfinished. The artist grappled with the artwork for nearly three decades, and over the period, it went through numerous transformations. Originally the prostituted was an unknown woman, but later, Rossetti repainted the figure to portray Fanny Cornforth, one of his favorite models. The artist also struggled with several technical elements in the painting. Rossetti’s friend Ford Madox Brown wrote about the painstaking process of painting the calf: “getting on slowly he paints it in all like Albrecht Dürer hair by hair and seems incapable of any breadth.” The artist’s assistants, Henry Treffry Dunn and Frederic Shields, helped with the painting. Additionally, it is possible that the artist Edward Burne-Jones also worked on some aspects of Found.